We commence this week, according to promise, the series of Engravings of places of interest in Warwickshire - some of which will be honoured by the presence of our gracious Queen on the occasion of her Majesty's visit next week, to Birmingham. We give also a view of aston Park, which according to present arrangements, the Queen will inaugurate on Tuesday next. The following particulars regarding the forth-coming Royal are from a Birmingham paper:- 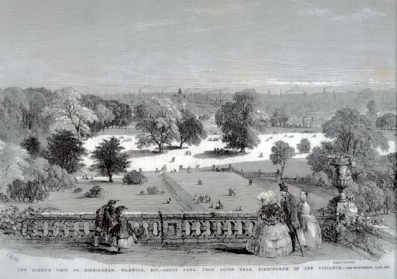 The Queen at aston Hall with Birmingham in the distance

The day fixed for the visit of her Majesty and the Prince consort to Birmingham is Tuesday, the 15th inst.; and the preparations which are being made in the great industrial capital of the midland counties for this auspicious event are upon a scale of more than ordinary splendour. The Municipal authorities have voted £3000 towards the necessary expenditure, upwards of £1500 of which will be devoted to the decoration of the Townhall alone. The Queen and the Prince consort will proceed to Stoneleigh abbey, Warwickshire, the seat of Lord Leigh, the Lord Lieutenant of the county, on Monday, the 14th inst, travelling by the London and North - Western Railway from the Euston square terminus. There they will remain over night, and make their entry into Birmingham on the following day at noon.

abbey is a distant from Birmingham about seventeen miles and three from Kenilworth, the nearest point of railway communication to Birmingham. From Kenilworth the royal visitors will travel by railway, and on arriving at the railway station at Birmingham they will be received by Mr Ratcliff, and the Mayor, accompanied by the Town clerk. Thence they will proceed to the Town Hall, where an address of welcome will be presented from the corporation, in the presence of about 5000 of the principal inhabitants and the neighbouring gentry. This ceremony over, her Majesty and the Prince consort, attended by municipal authorities, will be escorted to aston Hall, two miles distant from the centre of the town, a fine old baronial residence, at which charles II. Halted two nights on his way to Worcester, where they will take luncheon. aston Hall, with 35 acres of the adjacent land, as been recently purchased, at a cost of £35,000, raised by subscription among the inhabitants of Birmingham and it's immediate neighbourhood, with the view to the hall being dedicated to the purposes of a museum, library and a picture-gallery and the land for public recreation. The park will be opened by the Queen on the occasion of her visit, and thenceforth devoted to the public use.

From aston Hall Royal visitors will return to Stoneleigh abbey, where they will stay over Tuesday night and will proceed to town on the following day, paying a visit to Warwick castle, the seat of the Earl of Warwick, on the way

The inhabitants of Birmingham are looking forward to the Royal visit with intense interest, and the occasion will be of great public rejoicing.

Thousands of the population from all directions for miles around will conveyed to the town by special trains. Upwards of £800 has been expended in restoring the fine peal of bells of the old parish church of St Martins, and will be rung for the first time in honour of her Majesty's visit. after departure of the august visitors a grand banquet will be given in the Town Hall in the evening, at the sole expense of Mr Ratcliff, the Mayor, to about 500 of the principal inhabitants.