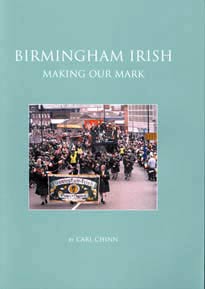 Many different peoples make up what is our vast and culturally diverse city of Birmingham. Below are a few memories from our Irish friends who for one reason or another found their way to our great city. Many thanks to carl chinn who allowed us to use extracts from his book: Birmingham Irish: Making our Mark by carl chinn (ISBN 070930241X)

I left Dublin for Birmingham just for the crack,
and I never thought that I'd never go back. I'd never go back.
My family and friends they were all left behind,
I just hopped on the ferry, my fortune to find.
I landed in Brum on a cold frosty morn, and soon I was wishing I'd never been born.
I knocked many doors in this dirty old town before I found some-where to lay my head down.
"No Irish, No Blacks", no bloody dogs, the Irish were "Paddies", the blacks they were "wogs".
Well, I paid her a pound and she showed me my bed, there were five other beds there, but she hadn't said.
Then I worked on the buses, I worked on the roads, I worked in the factories, giving it loads.
Then I married a "Brummie", a nice little thing, I took here to "Samuels" to buy her the ring.
She gave me four children, three girls and a boy, for many long years they were my pride and joy.
I had to work hard then with four children to raise, and soon put behind me my Teddy Boy ways.
I delivered the milk, I delivered the bread, then in the evening sold ice-cream instead.
Got a job on a jack-hammer up in the town, the hammer stayed put, I went up and down, the foreman said hey son!
You better go home, come back again when you've gained a few stone.
Now a night shift in Lucas,
Should have stayed in my bed,
Turned out two thousand screws without any thread!
The kids have grown up and gone,
Now, the wife has gone too,
and I am retired now with nothing to do.
It's sad when you think your life is gone in a flash, it wouldn't be bad if I'd made loads of cash.
There is no-one back home now, they have all passed away,
I can't pay a visit, there is nowhere to stay.

Sometimes I feel just a little bit sad when I think of my life back home as a lad,
With Prince by my side the green hills we would roam,
On hot summer days we were never at home, a swim in the "Dodder" below "Hell Fire" club, then out with the pan and scoff all your grub,
a day at "Portmarnock", a climb up "Howth Head", then home for your cocoa and fall into bed.
I believe back at home now they are all rolling in dough,
and ex-pats from England, they don't want to know,
I just hope they know how lucky they are, for the standard of living is now better by far,
For the wages and life style went up like a balloon, it's just my bad luck I was born too bloody soon.

Well there is no going back now, it's over and done,
Though I've shed a few tears, I've had lots of fun, I've had a full life and things can't be bad,
When callum and Lauren say "Hello Grandad".

Well, they will plant me in Witton when I pass away,
and here in this city forever I'll stay.

I love Birmingham by James McTeigue

My story began way back one bright, early summer morning in april 1954. arriving on the overnight train from Holyhead, I was a shy young 17 year old from rural co. cavan. I was met at New Street station by some friends who themselves had only recently come over. I found lodgings in Long Street, Sparkbrook with the late Johnny Burke. From there I found my way out to cadbury's. Twelve months later, owing to my health I got a job at the austin Motor co. I loved the work there, and I got lodgings in Trafalgar Road, Moseley. Some time later, I met a co. cork Bus conductress, Mary, on a blind date and as they say, the rest is history.

I love Birmingham and it is my home, we had good times and not so good. I will always be grateful to Birmingham and the English people, which I have many friends. I still have fond memories of my early days in Brum, many spent in St catherine's old hall in the Horse Fair and all the other dance halls with thousands of young men and women mostly Irish. They were lovely days. I still go back to co. cavan fairly often now we are retired.

Spreading My Wings by Maura Bye

Hailing from Mullingar in Westmeath, Maura is happily settled in Brum and has no regrets about the course of her life. She is married to a Brummie and has five children and seven - nearly eight - grandchildren, all of whom live in the city. However, Maura still recalls powerfully the homesickness which at times nearly overcome her when, as a nineteen-year old, she tried to make a life for herself in a different land. With a good job at the GEc in Witton, she was able to send money back home but her unhappiness at being away from her people led her to lose weight significantly. When, after many months, Maura did return to Ireland, her mother knew she had to build her up and did so by feeding her daughter with a mixture of Guinness and milk.

Birmingham always Lured Me Back By Breeda Harrison, nee O'Driscoll

I left my home in Bantry, co. cork in March 1944 and lived ever since in Birmingham. Recruitment was on for workers and as my older sister was already here, I, though under the required age of 18 years, was allowed to travel by special permit. Luckily I knew my destination, normally it wasn't revealed until reaching a special centre in Dublin, when you had a medical and overnight stay, and in the early hours of the following morning, escorted to the ship sailing to unknown territory. It was all very daunting, but exciting. Someone in authority met the groups at the end of each leg of the journey, directing each one to the right train etc. and answering queries.

It was evening when I arrived at Snow Hill Station where I was met by my sister and friend. We boarded the No.2 tram to Erdington, where all three of us were billeted with a family. It was `love at first sight' for me with the trams. I really enjoyed the rides and the sound of them. Too bad they were axed.

Next day I checked in at aeroplane, Motor, aluminium castings factory in Wood Lane Erdington, aMac for short, where my sister and friend worked in a stifling hot foundry, die-casting pistons for planes, dangerous work and terrible conditions. Imagine being thrown in at the `deep end', when none of us had seen a factory, let alone worked in one. Luckily for me I was given a cleaner and cooler job in the Inspection Department. Despite the conditions, I enjoyed my time there, and everyone was friendly and most helpful, very much appreciated by an inexperienced lass far from home and missing family and friends, the sound and sight of the sea and mountains which to this day I still miss so much.

My first introduction to chips was in the aMac canteen, I thought they were wonderful. The buildings and surroundings were all strange, as were the accents, sayings and customs and it took a little time to get used to them. Very shortly after my arrival the air-raid sirens went off. We were rushed out in the garden in the dark and urged into the shelter, assured steps were installed. To my horror they were missing and I fell into this black hole, ripping my leg badly on the sharp iron of the door. That was my first and, thank God, my only experience of air raid shelters. The end of the war was in sight and the raids eased off.

Our wages, after expenses were paid, didn't allow for much saving for fares home, but we were very fortunate to be issued with two travel vouchers per year, costing just 7s/6d each, enabling us to visit our families and reassure them that all was well with us. We had some good fun on very little money.

I spent a few years at aMac until the restrictions on job changes were lifted. Dunlop was close by so my friend and I fancied a change and spent some happy years there in a much cleaner environment and our welfare was very important to the company. Food of course was still rationed but the works canteen served us well. at weekends and off-time we frequented the Queen anne café in High Street, Erdington, right opposite the Palace cinema, where we parted with our limited funds on food and entertainment.

Breeda met her husband in that café. He was a Welsh lad named Phil, who had also come to Birmingham for work. They married in 1952 at the abbey church Erdington. In the early years, Breeda was `very reluctant after holidaying, having to leave behind my beloved seaside and return to the `Big Smoke', but somehow Birmingham always lured me back, and it's been good to me. I've made some wonderful lasting friendships and despite the disasters attributed to the Irish, I've never experienced prejudice at any time.'

John Kiely grew up in Pallaskenry, co. Limerick, where life was not too bad because the land was very fertile, but when he was eighteen he had some savings and decided to try his luck in England.

I arrived in Birmingham at about 6.30 am on a Sunday morning, 23rd January 1956, a cold and frosty start, but a kind couple (Brummie) saw my situation and invited me to their home at Six Ways, aston. I had breakfast with them, and they showed me around the area, I found digs, a nice room fully furnished, and breakfast and evening meal for £2-12s-6d a week, by Six Ways, aston.

Next morning I found out that IcI Ltd, Holford Drive, Perry Barr, were looking for workers, so I filled in the appropriate forms, passed the medical etc., and started work next morning at 7.30am as trainee caster and crane driver (overhead) at £16-10s a week, a `small fortune' in that era! after a month's training, I passed the full safety tests of being efficient at casting brass, pouring the metal in to ingots (moulds), and a safe and responsible overhead crane Driver!

My wages now went up to £23 per week, plus shift allowance, what a country!

I have great memories of IcI Ltd, but after 8 years, I had to change my job (on Doctors orders), as the heat and smoke was making my skin too dry, So I got a job at Rover cars Ltd, Solihull as a Track Storeman, at another good wage (all days), so I took on a part-time job as well in the evenings in the theatres, props and fly's etc. I also got myself an Equity card and worked as a `walk on' actor in series such as `crossroads' (ITV) and `The Newcomers' (BBc) at the Gosta Green Studios, by aston college, now aston University. I made great friends in `The Newcomers' especially Wendy Richard.

I am retired now, but I shall always be very grateful to Birmingham and its friendly people. I am also a proud member of the RaOB, (Royal antideluvian Order of Buffaloes), a Royal order!