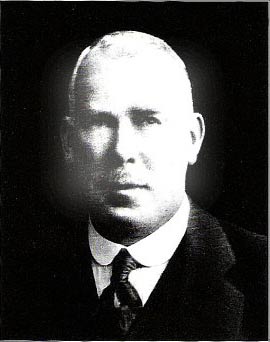 arthur Price started his first factory at the back of a tenement building sixteen and a half Gem Street, aston, Birmingham making cutlery, knives spoons and forks, building a reputation for hard work and quality silverware as he made his way through life building to the company now known as arthur Price of England located in Lichfield.

The full story can be read in The cutlers Tale by John Price a most enthralling story about the life and times of a Birmingham company Price £14.95 or from your library ISBN 0 953008908

I recommend this as a good read, local history and social history 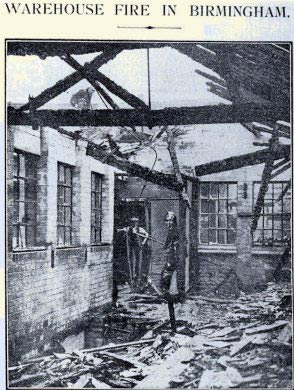 The opportune action of a Birmingham postman led to the prompt discovery of an outbreak of fire at a Vauxhall Street warehouse early today. He was in Dale End when is attention was directed to a glare in the sky not far away, cycling to Vauxhall he found that flames and smoke were ascending from the large building occupied by. Price and co LTD who are manufacturers of cutlery. He at once gave the alarm, slightly cutting his hand in breaking the glass.

There was a prompt response from the headquarters and Lingard Street, 27 men and five machines, under the second and third officers, being speedily on the spot. They found that the fire was concentrated in a two-storey building used as warehouse and packing rooms fortunately separated by a spacious yard from the three-storey building where the process of manufacture is carried on. There were however, large stocks of goods, including canteens of cutlery intended for the christmas trade, but as the factory is undamaged it is expected that there will be no undue delay in executing orders.

Mean while, police had awakened the occupants of houses in the vicinity, as a precautionary measure, but there was no undue excitement among these, the fire being some little distance from the nearest houses, which abut on the factory part of the building.

On the other side of the burning premises, but separated by other factories, are the stables of The Birmingham Dairy company Limited. The stableman, Mr Woodward, arrived at his job just as the fire was discovered, and when the smoke began to penetrate the stables, he with some help from the police, released the horses, some of them which were becoming restive, and led them into the open yard.

In dealing with the outbreak. Which had been subdued by 7. 15a.m. Two members of the brigade were injured, Station Officer Whitehouse, who suffered a strain of the right leg, and the acting officer Stone, whose left hand was bruised.

Valuable stocks of cutlery warehoused and packed ready for dispatch for the christmas trade were ruined when the warehousing and packaging rooms of a. Price and co, Ltd, Vauxhall Street, Birmingham, were gutted by fire today. Two firemen were injured in fighting the blaze; a number of horses in an adjacent stable, frightened by the smoke and flames, had to be removed; and as a precautionary measure residents in houses nearby were asked to leave their houses. The outbreak was discovered shortly before 5am by a postman named Mckenzie in dale end who noticed a glare in the sky.

He cycled down Vauxhall Street and having discovered the fire, went back to central-place and gave the alarm from a call box. 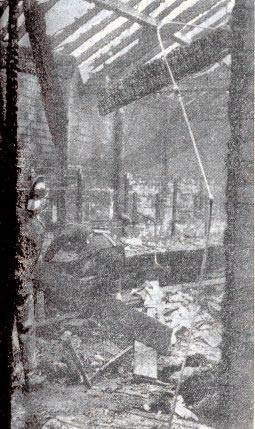 Six machines with 27 men under Second Officer Tozer and Third Officer Tozer, answered the alarm from head quarters and Lingard Street. They found that the fire had a fierce hold on the two-storey building. The roof was practically burnt off and the flames were a considerable height. Smoke penetrated to the stables at the rear which are owned by Birmingham Dairy Ltd and which contained 17 horses. When the stableman arrived on duty at five 0 clock the horses were beginning to show panic.

With the assistance of a body of police. The stableman was able to remove the horses. Families in the street Meanwhile the police had knocked up residents in houses close to, and most of them went in to the street to watch the blaze. Fortunately the brigade was able to keep the outbreak confined to the warehouse and no other part of the firm's premises were affected. Four jets from the main were used and it was only after two hours work that the main body of the brigade were able to leave. a detachment of firemen were still at work late this morning.

Two firemen who were injured District Officer Whitehouse who strained his right leg and acting Officer Stone who fell and damaged his left knee. Both of them were able to resume duty this morning. The manufacturing part of Price's works were not involved and the Evening Despatch was told this morning that the firm hoped to restart again very shortly.