The "Proper chapel" around the 14th century 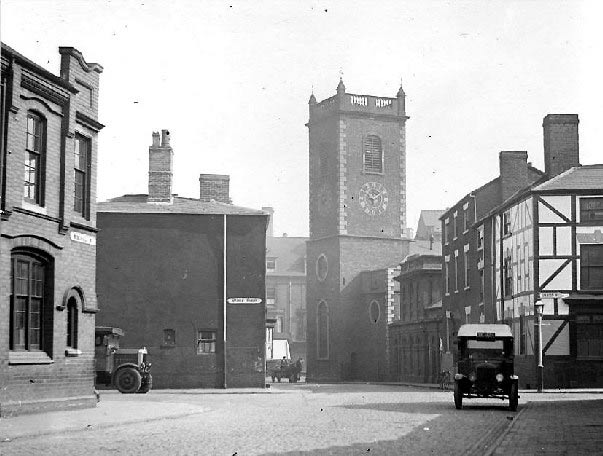 St Johns Deritend
For many years Deritend was part of aston

The church of St. John is to be demolished having been acquired by purchase by the corporation. This was the second oldest chapel in the old aston ecclesiastical district. It was founded in 1375 in the days of John Wycliffe by the inhabitants of Deritend and Bordesley owing to the distance from their parish church of aston and the constant flooding of the River Rea.

Because of these obstacles to worship and " lest it should befall that the infants dwelling in the said towns or hamlets, for the want of the rite of baptism might perish for ever," the parishioners determined to build a chapel at their own doors for their own use," and this object was achieved in 1381. By arrangement with the monks of Tykeford and the Vicar of aston the parishioner and of Deritend and Bordesley were invested with the power of appointing their own minister, a privilege which enabled them to adopt a form of worship more in accordance their, conception of Protestant doctrines

This meant that the ministers were appointed on an elective basis, but there were so, many poll abuses that the practice was abolished in 1890, in which year the chapel was assigned to the rural deanery of central Birmingham.

The structure which is now awaiting demolition is a rectangular building of brick in the heavy Italian style, with a square tower terminating in open balustrading and pinnacles, and once containing eight bells. In a niche with in the chancel on the south side was a memorial bust of John Rogers, the proto-martyr of the Marian persecution, who was born at Deritend about 1500 and was burned at Smithfield. Rogers was the editor of the first Bible to be printed in England. The bust, executed in carrara marble was unveiled in 1883. 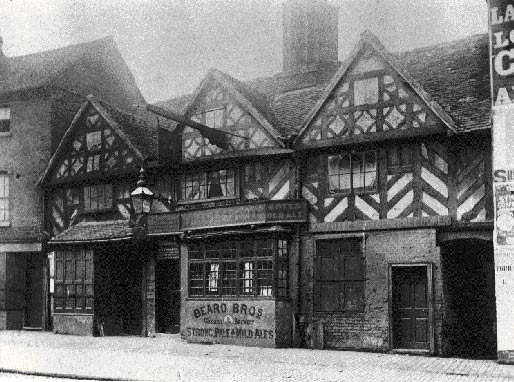 The Golden Lion This pub was resited in cannon Hill Park
There are murmers that it should be returned to whence it stood.
For many years Deritend was part of aston

The Golden Lion, a half-timbered house of the Elizabethan period, which stood for centuries in Deritend, and in which Rogers is believed to have taught, was bought by the Birmingham archaeological Society and offered to the Birmingham Public Parks committee. It was re-erected in cannon Hill Park, where it now stands as a fine example of old Birmingham architecture and safe from the of sweep of progress.

another historical landmark which disappeared at the end of the last century owing to the improvement of the area, was an old house known as assinder's Original Tripe House, which stood near Moat Lane and was one of the many " burbages " in the occupation of free tenants which were recorded as existing in 1553. Nearby was a market cross which was demolished in 1784. The 11 Old Leather Bottle Inn, near Deritend Bridge, was removed about 30 years ago.

There was the shoeing forge John Roberts in Digbeth which was taken down in 1804. This was a quaint structure flanking directly on the street. Its owner, blacksmith Roberts, is spoken of as a rare character. In a London magazine of 1792, there is a paragraph recording that "lately died in Digbeth, near Birmingham, in the 103rd year of is age, John Roberts who retained is faculties to the last and followed his employment within a few weeks of is death. This extraordinary old man married three wives, by whom he had 28 children. 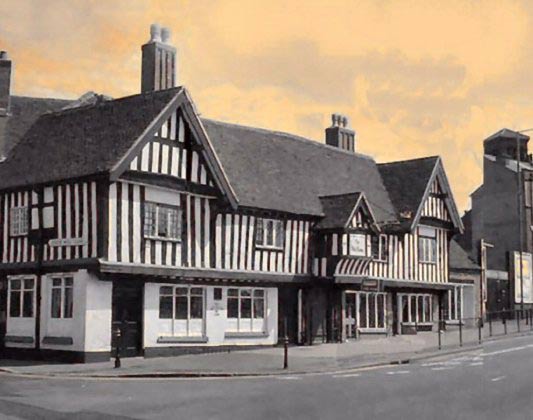