I was 10 yrs old, and had never seen the sea. My friend Margaret, went away every summer with her mum and dad and older sister. One year Mrs Williams suggested that I might like to go along with them - would I just?!

I looked forward to going on their holiday to Blackpool that year, I did errands for neighbours to get my pocket money. My parents paid for my holiday and I suppose supplied the Williams' with any incidental extras.

I remember that they hired a driver to get us there. What a squash. It was in 1947 - so not many comfortable cars in those days. But it didn't bother me too much. Mr and Mrs Williams suggested that if I went to sleep the journey would not seem so long. Sleep? I don't think so! My friend Marg dropped off for what seemed like hours, but then woke up wanting to be sick. Not too much of a problem because there were no Motorways so the drivers pulled over and she disgorged (what seemed like) the contents of her digestive system. I was glad that I hadn't gone to sleep if that was the result.

I remember we went through Wigan, and the driver said that we would be surprised at the people that we might see. More like horror, everybody seemed to be in shawls and the children were bare footed. Even us, from the slums of aston had shoes or boots. My lasting memory was that everywhere seemed to be black or grey. I remember also hoping that Blackpool wouldn't be as bleak, the Black in the towns name suggested that I might be wearing a shawl by the end of the week.

We arrived at our boarding house on Blackpools North Shore. We were right at the top of the house, (in the attic?) . I loved it, but I don't think that my guardians were any too impressed . There were two double beds, and I think a single. But mostly I was in with my friends big sister, and Marg , I feel sure was in with her mum and dad.

Before tea, I remember that Mrs Williams took me to see the sea, the tide was in, so I started bleating, that there was no sand, she assured me that it would be there tomorrow. We went back for tea. I remember that we were on a long table, about 10 guests altogether, and Mrs Williams said a strange thing like "Who will be mother" I seem to recall, that she was nominated for that honour. Which to me was no biggy as she was a mother anyway.

Next day started sunny and stayed that way for the rest of the week. We spent most of each day on the beach. Which was huge, and miles from the sea (it seemed to me), also I remember that there was a lot of jelly fish, which we did hops skips and jumps to avoid, because the big sister told us that we could die if we trod on one. Not this week thankyou!

See the attached photo of us all going to the beach, Marg and me with our buckets and spades - I'm the one at the front of the picture.

We also went to the Lido , and I remember getting inside the fountain, and Mrs Williams nearlly having a fit, because she thought I had drowned. consequently I was banned from leaving her sight for the rest of our visit to the Lido.

We went to the tower, where Reginald Dixon was entertaining the holiday crowds with his "I do like to be beside the seaside" at least I assume it was Reg Dixon, and then into the hall of mirrors which I think was in there. I loved it, I think I was more trouble than I was worth to the Williams's because I was extremely exciteable, and thinking back I probably spoiled their holiday, but at no time did they tell me off. There was also a Noahs ark?, in there. I remember there was a weighing machine, which said to hold the side handles tightly, which I did, and got an electric shock, Mr Williams was furious, as he found out that one of the attendants turned on the electricity when anybody got on the scales, and he all but punched him on the nose.

That was the week I also discovered that it was possible to eat pink cotton wool on a stick. I'd never seen candyfloss before. Mmmmm did I lap it up?

It was Friday before i could look round, so now I dragged my friend and her family round the shops - I had to find something to buy my mum and dad; crikey that 21/- pocket money that i had taken with me was like elastic stretched further than 21/- has ever done since. I do remember buying my mum a brooch cameo pendant on a card that stated it was a 'Present from Blackpool', I seem to remember buying my dad an ash tray which also admitted that it was a 'Present from Blackpool'. I think the Williams's were glad to get rid of me - and they never took me away again Wonder Why?

We all piled on to the coach for a day at Rhyl from Vicarage Road Sec Mod Girls- aston. Our teacher Mrs Smith, was the organiser originally it was only our class, but as Miss Lavender another teacher came along i think it might have been her class as well.

However, it was a gorgeous day (weatherwise). and we all had to pick a number for the seats, so as to save any arguments about who was sitting where and by whom. can't remember who i sat by, but i never could sit still, so maybe i did a musical chairs round the coach. 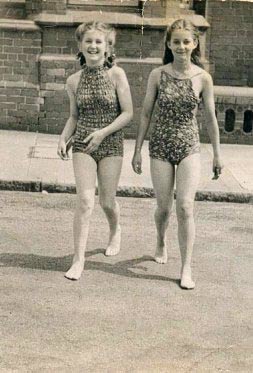 I remember we all sat on the beach, in our cozzies, and some of us went across the road, to seaside stalls - most of which where selling 'tat' but it was obligatory that we should take something home from the seaside. Looking for souvenirs, we found one belonging to this 'wide boy' - (spiv - for want of a better word). He had a load of penknives, 6d each - which was cheap even for that age. The downside was, that they were as rusty as; well never mind; His spiel was "a real bargain gels, you can get the rust off by rubbing the blade in the sand" (did you recognise the cockney accent?). Well that did it for us, we bought one each for our dear old dads; went over to the beach and proceeded to get them shining by rubbing in the sand like he told us. Only trouble was he didn't tell us that they would become so blunt that they wouldn't cut butter afterwards. Hey ho another learning curve.

another classmate from that day remembers taking tomatoe sandwiches, and when she opened them they were just a wet mush. She must have ate them though or she cant remember not eating them. another friend has told me since, that another girl who was on the trip, had a woollen cozzie knitted by her mom, and when she went in the sea it dropped nearlly to her knees, I cant remember that, but it must be true, because you wouldn't make that up - would you?

It was as I said a glorious day, and I still have a photo! to prove it of another girl and me strutting across the road in our cozzies. Behave y'self - by the way i'm the geeky looking one with the plaits. and i only live about 15mins away from that road now. Strange innit ?