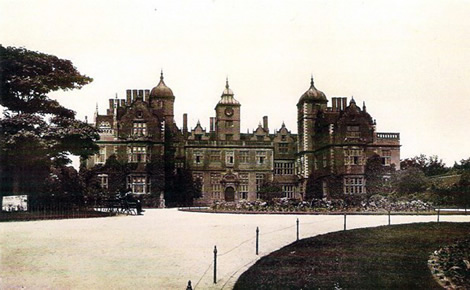 This building was commenced by Sir Thomas Holte in april, 1618, and finished in april, 1635, Inigo Jones being accredited with the design. King charles I, in his days of trouble, paid a short visit to the Hall, his host being punished afterwards by some of cromwell's soldiers and the malcontents of Birmingham besieging the place in the week after christmas, 1643. The brick wall round the park, nearly three miles long, but of which there are now few traces left, was put up by Sir Lister Holte about 1750, and tradition says it was paid for by some Staffordshire coal-masters, who, supposing that coal lay underneath, conditioned with Sir Lister that no mines should be sunk within it's boundary.The Hall and Park were held by the various generations of the family till the death of the late Dowager Lady Holte. (For an accurate and interesting description of the edifice see Davidson's 'Holtes of aston'.)

The act authorising the sale of the aston estates received the royal sanction on July 10, 1817, and the sale of the furniture and effects in the Hall was commenced by Messrs. J. and c. Robins on September 22. The sale lasted nine days, there being 1,144 lots, which realised £2,150; the farming stock, being sold afterwards for £1,201. The Hall and Park was put up on april 15, 1818, and was bought by Messrs. Greenway, Greaves, and Whitehead, bankers, of Warwick, the estate of 1,530 acres being let off by them in suitable lots. The herd of deer, reduced to 150 head, was sold December 21. The Hall was rented by Mr. James Watt, son of the James Watt, and for many years it was closed to the public. at his death, in 1848, the changes which had been going on all round for years begin to make themselves seen in the shape of huge gaps in the old wall, houses springing up fast here and there, and a street being cut through the noble avenue of chestnut trees in 1852.

By degrees, the park was reduced to 370 acres, which, with the Hall, were offered to the town in 1850 for the sum of £130,000; but the Town council declined the bargain, though less than one-half of the Park (150 acres) was sold immediately after for more than all the money. In 1857 a 'People's Park' company was started to 'Save aston Hall' and the few acres close round it, an agreement being entered into for £35,000. Many of the 20shilling shares were taken up, and Her Majesty the Queen performed the opening ceremony June 15, 1858. The speculation proved a failure, as out of about £18,000 raised one-half went in repairs, alterations, losses, and it would have been lost to the town had not the corporation bought it in February, 1864. They gave £33,000 (£7,000 being private subscriptions), and it was at last opened as a free park, September 22, 1864. The picture gallery is 136ft. long, by 18ft. wide and 16ft. high. In this and various other rooms, will be found a miscellaneous museum of curiosities, more or less rare, including stuffed birds and animals, ancient tapestry and furniture.