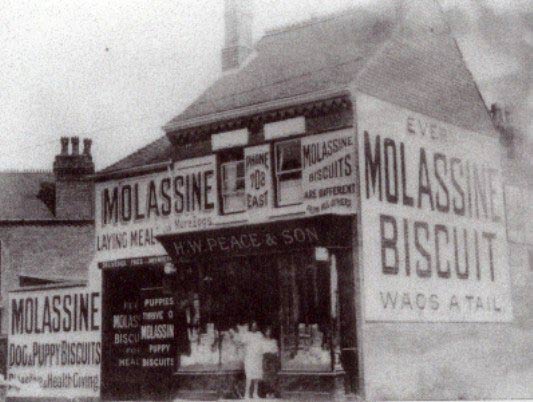 Nellie Hamilton Peace (nee aris).
They had 4 children: William, Minnie, Mary & carmen (she died when she was 27 days old). It would be great to hear from anyone connected to the family, but would also like to hear from anyone who can remember the shop.

They also owned other property's in the area Summer Lane & Potters Hill & cape Hill. The shop was owned by my husbands great great grandfather, Herbert Walter Peace, but his son, Herbert Walter Joseph Peace and His wife Nellie Hamilton Peace (nee aris) ran the shop. I think that they owned the shop from about 1905 - up to the 1950's

Herbert Walter Joseph & his wife amelia Peace (nee Mills) lived and owned a business at 221 Summer Lane, this is where they lived in 1881 (info from census). They had two servants

comments: I was born at 10 Witton road, right on six ways. The shop was directly opposite the Baptist church. My dad was the barber from the 1940s to 1962 when we moved to great Barr. I attended, along with my siblings, roger, Keith and Lynne, albert road primary. I remember when the steeple at the church fell in one stormy night. It was very frightening as we thought it would fall on the shop, so for a couple of nights we slept on the first floor! The shop was interesting too. It’s still there. We were convinced we had a ghost as both my mum and eldest brother saw the ghost of a young boy in the attic bedroom. I have happy memories of living in aston. Went to the anniversaries at the Baptist and Sunday school, then later the Methodist church on Victoria road for girl’s life brigade. Remember six ways before expressway was built, shopping in new town, Lozells and seeing Santa on his way to Lewis's in the city centre. Hoping someone may remember I'd

My memories of aston

My father Wal Faulkner was the barber on six ways from 1945 to 1962. He was well known in the area. We used to have the Villa team in the shop having shaves and hair done in the 50's and 60's. He was also secretary of the working men's club on Witton road, this was opposite the library.
I remember going to the anniversaries at the Baptist church when I wore a white dress and gloves. also I went to the Sunday school. Later, I attended a ballroom dancing class down towards Perry Barr and the girl’s life brigade at the Methodist church. I remember the old back to back houses near the Methodist. They will forever be imprinted on my mind as I was sent at the age of 4 to stay in the courts with a friend of my mums' her name was Dot Nut and I was there while my mum had my sister Lynne who was born at home. The courts were interesting. Outside loos with newspaper squares hanging on a string - spiders in the cornersno hygiene here. The family next door were very poor - they drank tea out of jam jars! I remember the aston express way construction, police sergeant savage on his horse, May? Who ran the butchers shop, Vicky Banister next door who had a children and baby shop? hedges the chemist where I first had my eyes tested. This was a really old chemist with coloured bottles everywhere,dark woodwork and the optician’s room was small and very Victorian. I also remember the dentist round the corner whose garden backed onto our shop. Our shop was interesting. We had a yard at back with an old mangleand I helped my mum put the sheets through it. This was before she acquired a spin dryer. The house was old, built about 1860's and had been a bicycle shop and before that a porter shop. My dad decorated the attic and found a newspaper cutting about something that had happened there in the past. My mum and oldest brother, Roger were convinced that they saw a ghost of a young boy on several occasions. The room upstairs was certainly creepy but this could account for the dark furniture and wallpaper prevalent in those days. We all attended prince albert primary and I can remember the teachers were miss Lewis, Mrs Mann, Mr Neville and Mr Evans, the latter having a real talent for playwriting. I once took the lead part in one of his plays. Then there was of course, MissTeague the headmistress with her lilac rinse. Sandra Lippet was in my class later to become Maggie Moon and she lived at the fire station. The school looks pretty much the same now except of course, for those deadly outside toilets. I think we must have caught ever germ under the sun from those! I remember at the age of 9 or 10 walking the streets around aston to see my friends. I never felt at all threatened except for the stray dogs but certainly not any humans!! We would roller skate round the formal gardens at aston hall until the parky told us to get lost. Then we would play on the witches’ hat in the park. Mum would take us to Lewis's to see Santa and we would queue for ages on the back stairs. This was magical and we always sat on Santa's knee! One day I returned from school to see scaffolding on the steeple of the Baptist church. The night before we had had a vicious storm and the steeple crashed down into the church. There was talk of us being evacuated, but we spent the following night sleeping all together on mattresses on the second floor, just in case! I had real nightmares about the steeple falling on us, but I think it’s still there today. We were allowed to ride our bikes around the block, passing the newsagents (alan) on the corner, round to the Methodist church and back up the hill to six ways. This was our playground. It was a lovely time in the 50s even if things were a bit austere. I felt safe and loved and look back at living in aston with great fondness. 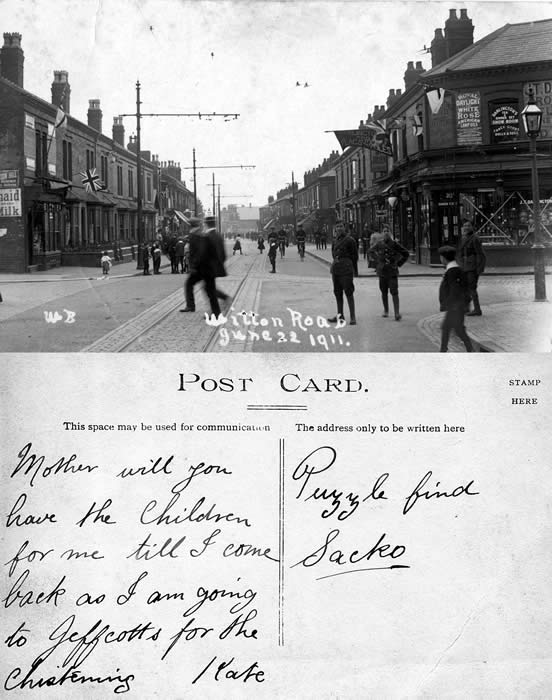 thank you for creating and maintaining "astonbrook through astonmanor". I came across it while researching my great grandfather, John Westwood, who lived at 271 Park Road andwas a member of the John Baker Lodge of Oddfellows. Yours was the only site I found to mention the lodge. John was presented with a framed (hand drawn) recognition of his work with young people, which has survived thanks to my Grandmother's (Dora Walker, 184 church Lane before the aston Expressway) unwillingness to discard anything. This is how I know of the John Baker Lodge.

amongst other things in my Grandmother's collection, I came across the attached postcard which may be of interest. I cannot say where the photographer was standing but someone with local knowledge may know 'Darlingtons' on the corner. The writer, Kate, is Dora Walker's sister. I have no idea who Sacko is.

(formerly of Erdington but allof the family came from aston)