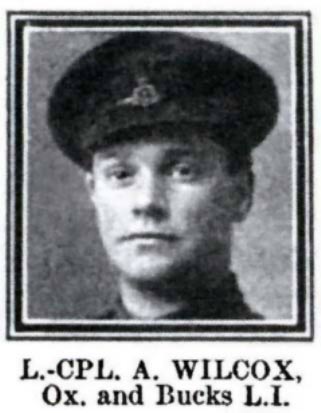 Lance corporal alfred Wilcox the 2nd 4th Battalion the Oxfordshire and Buckinghamshire Light Infantry.
alfred Wilcox was born in a back to back house in Wilton Street, aston on the 16th of December 1884. He was the son of William and Sarah ann Wilcox. His father worked in the jewellery quarter. alfred was educated at Burlington Street School in aston. On leaving school he worked as a diamond mounter for E. Durban and co. in Frederick Street. He later moved to the city of London and joined up in March 1915. His wife and two children then moved back to Birmingham and lived in Small Heath to be closer to their relatives.

On the 12th September 1918 near Laventie in France "For most conspicuous bravery and initiative in attack when his company was held up by heavy and persistent machine gun fire at close range. On his own initiative with four men he rushed ahead to the nearest enemy gun, bombed it killed the gunner and put the gun out of action. Being then attacked by an enemy bombing party corporal Wilcox picked up German grenades and led his party against the next gun finally capturing and destroying it. although left with only one man he continued bombing and captured a third gun. He again bombed up the trench, captured a fourth gun and then rejoined his platoon.

corporal Wilcox displayed in this series of successful individual enterprises exceptional valour judgement and initiative". Lance-corporal Wilcox died in Birmingham on the 30th of March 1951.

He was 66. He is buried in St Peter & St Paul's churchyard aston.