My Grand Upbringing In Summer Lane by Richard Sheppard 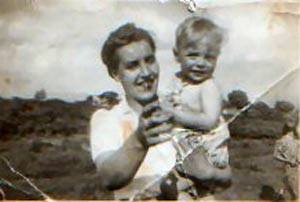 I was born in aston in 1948, at 7/97 summer lane, we lived in a two bedroom house, with an attic, living room and a kitchen. The kitchen seemed to go for ever to me, but looking back now it was a very small house with a large kitchen. I remember we had no electricity only gas mantles and a coal fires for heat, with the glow from them at night used to make the house feel so warm in the bad weather we used to have in those days. we had no bathroom all we had was a old tin bath, which we filled with hot water from the copper boiler, the bath was also used to wash the clothes in, every Monday was wash day

I recall mom doing her washing with her maid and tub. then she had to carry the hot washing into the yard to the mangle(my best horse ever)I used to sit there helping mom, she would put the clothes into the mangle and I would turn the handle, I think mom gave up on me helping her as I often caught her fingers in the mangle.

at the bottom of our yard was our outside toilet, this was a grand adventure at night time going out there with a candle for light to see the way, the toilet paper was sheets of little squares hung on a nail, when it was bed time we had a bucket with a lid to use, every morning it was taken out emptied and washed out ready for the next night. The best thing I loved about our toilet was we didn't have to share it with the neighbours not like the house, we shared the house with cockroaches, silverfish, mice and black bats. These were my very first play mates, and they kept me amused for ages.

at about 3 or 4 years old I remember going down new town row shopping with my mom and most of the time my nanny Barnes, who used to spoil me so much, she used to take me into the House That Jack Built ,(a bit like our Woolworth's) I remember her paying 1/6d for a pair of black plimsolls and a grey pair of ankle socks, of which you can still buy today but not at those prices, also does anyone remember the old baseball sneekers,they were well wicked in my day. the main thing I remember about this shop was no tills. You handed your money to the lady over the counter she would then put it into a tin and pull a string and off it would shoot, then the tin came back with your change and receipt, the mystery of those tins availed me for weeks until I asked me Nan who explained everything to me. 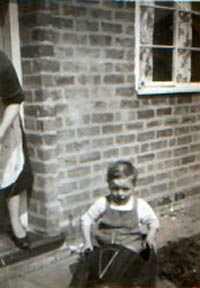 My Nan and I would leave the shop then cross the horse road and go into the new town market, which was made up of corrugated sheets of metal, the things we used to get from there, cars, comics, cap guns.... You name it you got it there. Before leaving for home we go into a café in there I would have a glass of pop and a piece of dripping cake or bread pudding (which I still eat) best days out ever with my Nan.

as I was growing up times were passing by and it was soon time for me to go to school, I went to Elkington Street Junior and Infants School. I made a friend there Keith Dolphin we were close friends but I couldn't wait until home time as I missed all my friends I grew up with as they went to a different school than me. We used to talk a lot about our time in school but we couldn't wait until the weekend when we were allowed to play out longer. We played cowboys - myself, colin Baines, Paul Mukalow, Tommy Ross, alfie Smith, Roy Small. We were the posse and Tommy (ding dong)Bell was Billy the kid the outlaw. We captured him and took him down Pails Yard to his moms brew house, that was the court and jail. colin who made himself judge(he was the biggest) found him guilty of breaking the law, so we handcuffed his hands behind his back stood him on a chair put a rope around his neck, threw it over the beam tied it to the bars and kicked the chair from under him and rode off. Llittle did we know he was hanging for real) as we rode away feeling great in ourselves.

Tommys mom came out of her house as she seen us go by but not seeing her son with us she went to check on were he might be she opened the door of the brew house and there was poor Tommy hanging like a good one, to cut a long story short Tommy was taken into hospital and we were taken of to the police station at Bridge Street West, (we all thought we were in for a hanging). Luckily Tommy survived his ordeal thanks to his mother. TOMMY SORRY MaTE we were only kids having loads of fun

as time went by we were still good mates and still played together in the street, I recall me and colin getting swizzles and frying them in batter and selling them to the kids, but if we had no swizzles we used maggots from colin's dads tackle shop. on growing up we ventured into pellet guns ,(don't worry we never shot anyone)we tried to shoot the cats as moving targets but they were a bit to quick for us, the other amusing thing we used to do was collect dogs pooh place it on some newspaper put on someone's doorstep set fire to it and then knock the door and run up the entry way. We would hide there and watch the owners come out to the door and stamp on it to put the fire out. That was good harmless fun of kids in my days amusing themselves.

Every Saturday we used to go New Town Palace Picture House (the flea pit) to watch Batman, Spiderman, Rocketman, Hopalong cassidy, and of course cartoons, (shame they still don't do it)

as for the shops, I remember visiting often which were local to were we lived in aston are T and V measly the locals called it.  Violets fruit and veg, then the infamous Baines fishing tackle shop and the best shop of all were dad used to take me was the penny pie shop on the corner of Summer Lane and New John Street. The news agents was there.

Then there was allen's fish and chip shop. Dad and I used to go there with a jug and basin for some faggots and peas (today's faggots are nothing like these). There was a little shop, I cant remember the name it, used to sell ginger beer and root beer I used to take dads empties back and get money back on the bottle on which I would spend on sweets.

I sometimes think about aston mom dad and my friends how we grew up together so happy not a care in the world, but to think how we lived in those days is so different to today, all the central heating electricity baths with running hot water and a toilet in doors. The main thing I have noticed since those days are that neighbours were so trusting in them days. You could go out for the day and not lock your door and come home to a letter on the mantel saying just borrowed some sugar, and everything would be there still, where as today you go out you have to lock all windows doors and set alarms so you can come home to your house still furnished, plus the children were safer and happier on the streets.