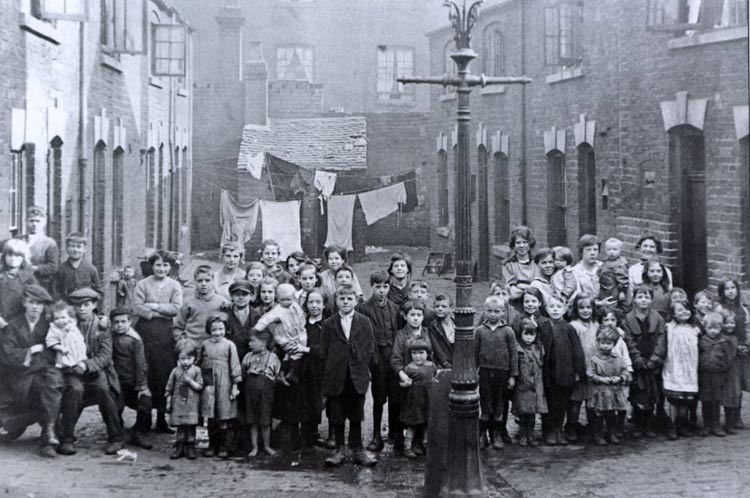 The Summer lane I used to know has gone forever why I don't know. I lived in a house up a yard, there where five houses originally six but one was burnt down; number six.

I have only vague memories of the house. I remember that one of the tenants put a garden fork through his foot and he was wearing wellingtons at the time. anyway there was five as I said earlier. Now at number five there was the Jones mother, father and Maureen who was the daughter. Mr Jones kept pigeons and we used to take them to the park (Blew Street) in a paper carrier bag, and let them go. Well, one day he asked us if we was going to the park, and we said yes. Well we was going to the park alright, but he never asked us which one. We went to Burbury Street Park and let the birds go when we arrived home, he asked us were are my pigeons? We said we don't know and when he was told Burbury Street Park was were they were set loose he went spare. He thought we were going to Blew Street which was in the opposite direction and the birds did not get home for over a week.

at number five lived Mr and Mrs Bird with her daughter and son in law Mr and Mrs Hawkins. They had two girls Patty and Joan. Mr Bird used to knock the bedroom windows for the people to get up to go to work, with a line prop. Their house was opposite the brewus. Next door to them at number three was Mr and Mrs Plimmer. They had a son, his name was Sydney. Mrs Plimmer died when she was young from diabetes and Sydney went to live in Leamington with relatives. Next door to the Plimmers at number two lived my dad's sister our aunty annie. She was a widow with two girls our Pauline and Sheila. Their father, our uncle Perce died when I was young and I only have vague memories of him. One thing I was told about him was he was a very good fisherman, and he won some very good prizes. Next door was were we lived. Our dad Fred, our mom Beatrice, our alan and me Brian, plus our black mongrel dog rover. In 1947 a firm took up residence in the empty shops numbers 259 and 260 they were a firm called Ingram and carless and they made fancy goods like pin trays, table lamps, candlesticks, ships bells enclosed in a ship steering wheel etc., Oh, and they also made us a top but we had to make our own whip!

I can remember some of the people who worked there, there was albert Ingram, Jimmy Ingram, Jack carless he lived in Victoria Road nearly opposite the swimming baths. albert lived in Kingstanding when it was posh and Jimmy lived on the outskirts of Brum near Sutton coldfield. Freddy Shale and his mate allan were wood turners they used to take me and my mate Billy Donnelly fishing in the works van. We had to sit in the back to watch if the lights were working, I suppose they couldn't afford the aa in those days.

Our mom also worked in this factory with a woman called Brenda and also there was Mrs Ingram and I think one of her daughters, I don't remember her name, emigrated to canada. Mrs Hawkins worked there as well and a little old lady and a man who lived at Beeches Estate near to the gravel pits. We went to his house for tea one Sunday us kids from the lane.