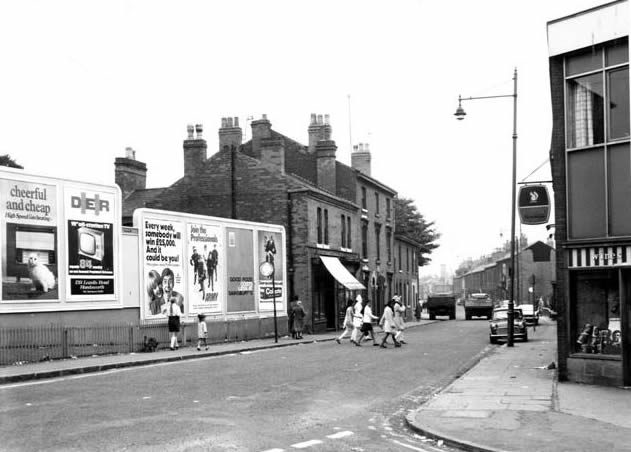 Standing on the corner of Park Lane & Sutton Street stood this quite large black water tank; it was about 30 feet in length 15 feet wide and about 4 to 5 feet deep. and would have held a few hundred gallons of water. This is only an estimate as young lads we did not know much about measurements it was taller than me, we had to climb up to see inside. It was constructed out of steel sheets and riveted together the same as a ship was constructed. The water was always very cold and looked dirty some kids were brave enough to have a dip.

My efforts were just to run my hands through the murky waters. I never learnt to swim till I was thirteen thanks to Mr Milner throwing me in the deep end at Victoria Road swimming baths, and that was on my thirteenth birthday. Back to the tank the idea behind these tanks was to supply water to the fire services in the event of the main water supply ruptured hit by bombs during the air raids. Then the pump tender would put a siphon hose into the tank so they could extinguish any buildings that where on fire. Some times they would have to connect the hose's in long lengths so as to get the water to the fire.

This stood on the corner for a long time after the war I often wonder what happened to that tank perhaps some one from Robbo's café would have known because it was directly opposite their shop.

The Dunns (my Grandparents) originally owned the shop later owned by Mr James, on the corner of Parliament Street and Park Lane. They bought the shop on the opposite side of Park Lane for their son charlie, round about the turn of the century, when he was around 21. He married Edith Turner, also a local lass, and they ran it as a Fruit and Veg Shop from at least the end of WWI, until they retired, when my Mom and Dad took it over (keeping the name). My Mom and Dad ran it in turn for about another 15 years, and then I believe it was run as a Pet Shop for a few years until the road was redeveloped.

The premises itself was quite interesting. It was about 2ft higher than the butted on terraces, and used to stand alone long before they were built. I remember going up into the loft, and seeing where there were rough holes knocked in the sidewalls where the main roof beams from the new houses had been simply poked through and rested on the existing sidewall brickwork. The building had been an Inn or Pub, called the Shakespeare Inn. Mom remembers an old fireplace in the living room, with busts of Wm Shakespeare and ann atherway, which held up the main mantelpiece. The Shakespeare Inn, as was, used to brew their own beer on the premises.

My Mom remembers the Brew House in the back yard, full of brewing "things", and also the christmas when it all fell down, when she was young! The premises had a very large opening through to the rear yard, large enough to drive a carriage and horses through - with the original gates even as late as the '50s when I was there. charlie Dunn had his own horse and cart before the war, which my Mom and aunt also remember well. charlie was quite a character - apparently very bright - so much so he used to help out with the teaching before he actually left school.

Even in my time, the remains of the old stables (mainly fallen down), were still at the top of the yard - along with a large wash-house with it's own built-in copper boiler, which I remember my Nan still using. Downstairs were large cellars, with vaulted ceilings and brickwork storage recesses - one half of which had been re-inforced as an air-raid shelter. The bunks were still down there when I was young! The Dunns had three daughters - Edna, Joyce (my Mom), and Jean. another, Joan, died either at birth or very young. Edna was quite interesting for her times - having left school (Burlington Street, of course) at the standard age, she went on to become the Manager of a steel rolling mill at Frederick Powers (in Saltley) - unheard of in the 1950s. She gained an external degree from B'ham University, and was well known enough to have newspaper articles about her. The third, Jean, also took over and ran the cooked meat shop, (formerly owned by the Whittaker's) for a time. I remember well the Friday faggot and mushy pea sessions - but my favourite was chitterlings - remember them? She remembers well the Whittaker's, and Mr Whittaker's Rag-and-Bone business run from the opening next door to the shop.

This was also an interesting building - always known as the "Lock-up", as at some time it seemingly used to be a local Police Station. In my aunts Living Room was the top of an archway, near to the floor, which used to lead down to the subterranean cells. I never found out if it was still accessible - but I suspect the cellars of the backing houses down the lock-up had effectively closed it off. as kids we had always heard the story of the lock up there was a building at the back of the shop. Which appeared to have no windows you could see through, this was at the end of the courtyard where the Harrison family live. It was quite a large building the wall furthest away from Park lane abutted Heathcotes yard in Parliament Street there was also another wall running a right angles to this one which was in the Newtons yard also blank if you looked over the wall the houses in Harrisons yard where like cells converted to houses with a verandah running down from one end to the other it was hard to explain but it looked foreign like you would see in the films of New Orleans or a French city.

The two surviving sisters - My Mom and aunty Jean, have moved, and currently live together in Weston-super-Mare. I met a lass at school (Saltley Grammar), and having moved around a lot are now living on the costa Blanca, in Spain. My wife's family are also interesting, coming from Showmen's families. She used to get taken to the Onion fair by her Mom, and get free goes on the stalls, and taken round the caravans. My Nans family, the Turners, were also aston folk - more on them another time. 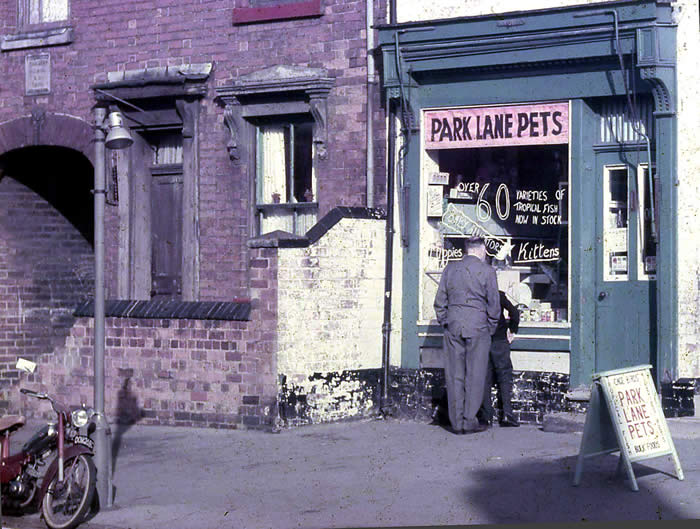 This how the shop looked like in the late 1950's 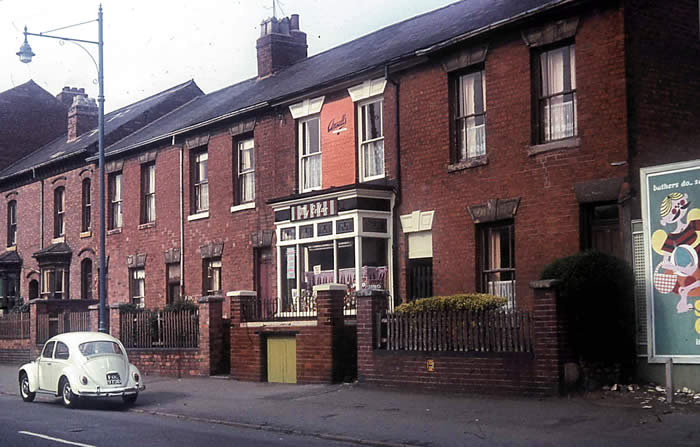 The outdoor in Park lane opposite Jones fish shop

Park Lane fish shop next to the billiard hall 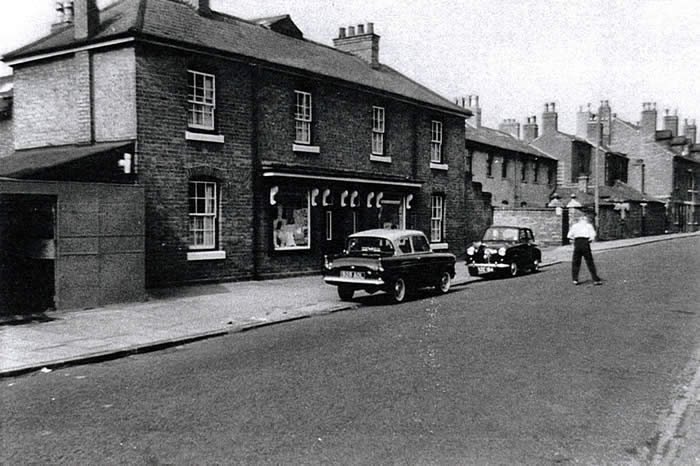 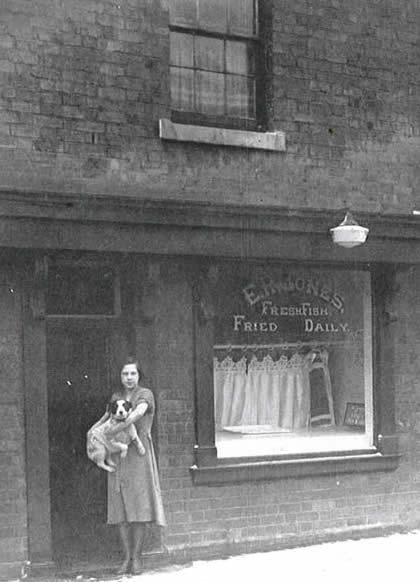 I have been researching my family history and came across your picture of a girl holding a dog outside Jones Fish and chip Shop, Park lane, aston.

Edwin & Sarah Jones were my maternal Grandparents. The young lady in your picture was in fact my Mother, Vera Warner (nee Jones) and Bonzo the dog. It was her sister Edna that emigrated to New Zealand towards the end of the 2nd World War.

I spent many a happy visit staying with our Grandparents and visiting my Uncle Sid, aunt Elsie and playing with my cousins John, Mary & Richard who lived in the adjoining house and Shop.

My mother set up the Wool and Haberdashery Shop in these premises after the war and ran the business until Uncle Sid and auntie Elsie moved away when the twins were born, as the house was too small.

My Uncle Bill, my mothers youngest brother, and his wife Edna then moved in the early 50's where their son Keith was born. auntie Edna (not the one who moved to New Zealand) took over the business. They stayed until the premises were compulsory purchased due to the aston Flyover being built. as a young girl I would push Keith's pram to aston Hall for a walk out.

I was also allowed to help in the Fish & chip Shop by Eying (cut out the bad bits in the potato) and chop the chips before they were fried and to grate the block of salt for filling up the salt cellars. I always remember the shop being a very busy and happy place.

I also recognised the Outdoor Public House opposite. I would take a jug over to have filled with ale for my Grandmother who would "Mull" it by putting in a hot poker, but only if my Grandfather was not around, as he was very religious and wouldn't have approved.

as a little girl we were bombed out so spent a time with our Grandparents where I went to infants school for a short while in 1945.

Thank you for presenting such an interesting web site, it brought back many a happy memory.

Looking down towards aston cross from Upper Thomas Street

Looking up Park Lane from Thomas Street and UpperThomas street

The Gospel Hall Park Lane prior to demolition 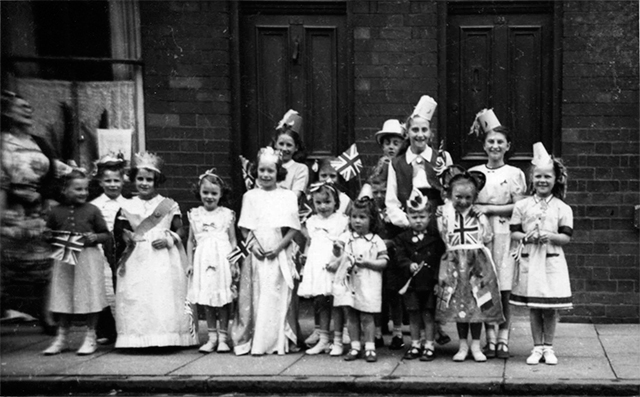 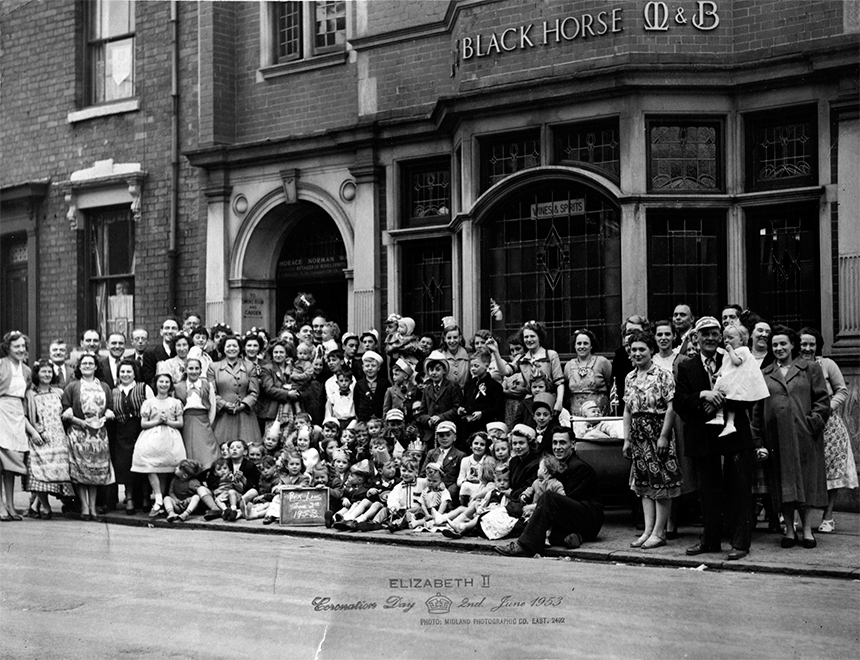