aston Parish church and its Daughters

The ancient parish church of aston is indirectly referred to by mention of a priest in the Domesday Book of 1086 and by 1165 there were dependant chapels in Yardley, castle Bromwich and Water Orton. However, the aston parish still covered a huge area and in winter this could mean arduous travel for parishioners. This was especially true for those living in Deritend and Bordesley who could be isolated by the river Rea and so the chapel of St John the Baptist was founded in 1381 and stood on the south side of what became Deritend High Street. For the next 509 years the parishoners living in Deritend and Bordesley had the right to appoint their own chaplain to celebrate divine services.

Rebuilding in 1735 and restorations in the 19th century gave what is shown in the photograph of St John the Baptist taken in the 1920s. However, it wasn't until 1890 that a parish was formed for St John and in 1939 the parish was merged with that of St Basil in Heath Mill lane. The site of St John was sold to Birmingham authorities and the old church used for storage until demolished in 1961. The eight bells, cast in 1776, were at the Bishop Latimer Memorial church in Birmingham in 1956.

With the growth of population in aston parish from the second half of the 19th century the need for new churches there became urgent. Between 1823 and 1952 another 31 churches were built and consecrated within the ancient parish of aston and the modern city boundary of Birmingham.

The following ecclesiastical parishes were formed directly out of aston parish of St Peter and St Paul:

aston Parish church was the main church for the Venville family, my Father's family, who lived in Wyreley Road, Witton. My Uncle William Venville is remembered in the church on the War Memorial plague. He was killed in September l915 in France.

Several years ago, perhaps l977, on a visit from canada to aston church with my husband, we spent a magical day literally locked inside the church. We had gone to the church to take some brass rubbings from some of the Holte brasses which are carefully hidden away in various parts of the church. We had asked permission beforehand. We were met at the church door by a wonderful old gentleman called Mr. Higgins, who was, at that time, a church warden and not only that had been one for over 50 years I believe. He told us that he was 90 odd years old and had lived in aston all of his life. 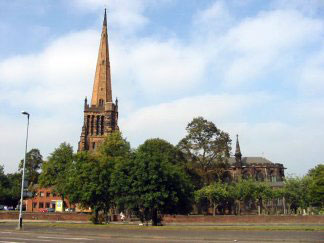 We told him that it would take some time for us to complete the rubbings and eventually he said that he must depart to go home for his lunch since he lived nearby. He asked us if we would mind being locked in the church whilst he was away at lunch. Mr. Higgins told us he trusted us but was worried about our safety! We all agreed to the lock-in and I certainly didn't mind being locked in aston church. I had visited the place regularly on my visits from canada and had taken my children there also. My brothers had also been christened there. Not me since I was born in 1941 and was christened very close to home at St. Mark's, Stockland Green due to the danger of air raids. While hubby, who by the way is a graphic designer, toiled away at the brasses. I was able to spend some quiet time reflecting over the history of the church and examining the Birmingham Military Book which was kept in the Erdington chapel looking for my mother's cousin's name...Jack Tweedie. Eventually, Mr. Higgins returned and kept us company and told us stories about his time as a church Warden. It was a few years after that before I was able to return to aston Parish church and when I did a new centre had been built beside the church to house offices and Sunday School classes, etc. I was delighted to see that it was called the Higgins centre. Mr. Higgins would have loved that I know.