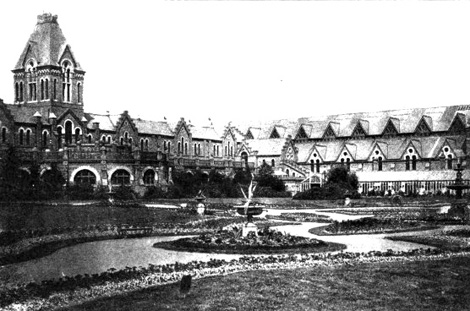 The most beautiful pleasure grounds in the Midland counties, cover 31 acres, and were originally nothing more than the kitchen and private gardens and the fish-ponds belonging to aston Hall, and were purchased at the sale in 1818 by the Warwick bankers, who let them to Mr. H.G. Quilter, at the time an attempt was made to purchase the Hall and Park "by the people." adding to its attractions year by year, Mr. Quilter remained on the ground until 1878, when a limited liability company was formed to take to the hotel and premises, building an aquarium 320 feet long by 54 feet wide, an assembly-room, 220 feet long, by 91 feet wide, and otherwise catering for the comfort of their visitors, 10,000 of whom can be now entertained and amused under shelter, in case of wet weather. Mr. Quilter's selling price was £45,000, taking £25,000 in shares, and £20,000 cash by instalments. The speculation did not appear to be very successful, and the property is now in private hands. The visitors to the Lower Grounds since 1864 have averaged 280,000 per annum.
From Showells Dictionary of Birmingham 1888

The aquarium at aston Lower Grounds was opened July 10, 1879. The principal room has a length of 312 feet, the promenade being 24 feet wide by 20 feet high. The west side of this spacious apartment is fitted with a number of large show tanks, where many rare and choice specimens of marine animals and fishes may be exhibited. On a smaller scale there is an aquarium at the "crystal Palace" Garden, at Sutton coldfield, and a curiosity in the shape of an "aquarium Bar" may be seen at the establishment of Mr. Bailey, Moor Street.
From Showells Dictionary of Birmingham 1888

This land laid out with the beautiful pleasure grounds laid out by Mr. H. G. Quilter, known as the aston Lower Grounds, a third local theatre (The Holte) was established in april 1879. a handsome block of buildings (on the model of the alexandra Palace, Muswell Hill,). Have been erected by the Lower Grounds company, in the centre of the increasingly popular grounds. comprising a large and complete aquarium, with a series of Fine art Galleries over it, and (at right angle therewith), a great hall 220 feet long, by 90 feet wide, suitable either for concerts or theatrical performances. On three sides of this splendid hall are broad galleries, and at the further end is a handsome stage, suitable for either for modern comedy or the elaborate spectacular pieces. When the building is used for the theatrical performances the floor is raised, and about three fourths of the hall enclosed, leaving the portion nearest the entrance as a commodious vestibule or promenade.By this means the theatre proper is shut of from noise and interruption, and the acoustic properties of the house are thereby greatly improved.