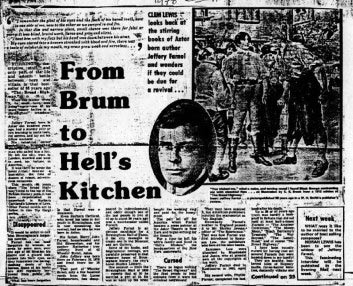 "I remember the glint of his eyes and the flash of his bared teeth, now to one side of me, now to the other as we swayed to and fro".. In that small and narrow place, small chance was there for feint or parry. It was blind, brutal work, fierce and grim and silent. "I beat him with my fists, but his head was down between his arms. My eyes stared into a heaven streaked with blood and fire, there was a taste of sulphur in my mouth, my arms grew weak and nerveless".

Stirring descriptive stuff, and only part of the life and death battle between hero and villain in that best seller of 60 years ago "The Broad Highway"

When the author wrote it, he could have been "living again" one of his more bloody battles in a Birmingham brass foundry. Jeffery Farnol, born in aston, one hundred years ago, had a stormy year or two learning to make tools, cut screws and lay out his fellow workers.

His industrial career unveiled in Birmingham when he..... a foreman who called him a liar. He left the city, went to London, married , and went to seek his fortune in america. It was there he wrote the novel that became a best seller, the first of dozens of robust, adventurous romances.

This month .60 years since "The Broad Highway" went to the top of the British literary pops, it has been republished in paperback in Barbara cartland's Library of Love.

Other Farnol novels are to follow in this 70p corgi series.

It would be unfair to call him Birmingham's forgotten novelist. Farnol has not been forgotten by women, or even by some men over the age of 65+. Mention his name and a glazed look comes into their eyes as they remember the daring, dashing deeds of his heroes. Some of his books are regularly borrowed from public libraries. What has been forgotten is that Farnol was a Brummie.

Even Barbara cartland, who loved his tales in her youth in Birmingham and is now sponsoring his revival, had no idea he was born in aston. His father, Barry John Farnol, brassfounder and Old Edwardian and his mother Katherine (nee Jeffery) lived at 43 Wheeler Street, aston. John Jeffery was born there on February 15, 1876. and lived there for l0 years. That part of Wheeler Street, only a few hundred yards from the Lucas headquarters, has disappeared in redevelopment and oddly enough, one of the last people to live at 43, up to about 30 years ago was a watchmaker called Farnol.

Jeffery Farnol is an obvious candidate for a Birmingham Hall of Fame, if the city manages to create one in the Museum and art Gallery. Some of his books and biographical cuttings are carefully preserved in that treasure house of Birmingham history, the city's Local Studies Library. One account-from the Birmingham Mail of 1920 - reports that at 30 he married a girl of 18. He was so hard up his bride bought the wedding ring and paid for the honeymoon. The pair set off for america where Farnol became a scene painter at the astor Theatre in New York and began writing for the theatre.

For a time he left his wife's family and lived in "Hell's Kitchen" the headquarters of the New York underworld.

There he began writing "The Broad Highway" and the first people to hear extracts from it were his criminal neighbours. They may have enjoyed it, but an american publisher rejected the manuscript as : "too English".

Eventually, Farnol's mother in England passed it to Mr. Shirley Jeavons, Editor of "The Sportsman". That was how Farnol was first introduced to Sampson Low, the publishers who took all his later books. Sampson Low were absorbed by Macdonald and Janes, who at present own all the copyrights of his work.

Jeffery Farnol died in Eastbourne in l952, aged 74. His second wife, Phyllis Farnol, completed his last book after his death. Up to 30 or 40 years ago there was hardly a bookshelf in Britain that did not hold at least half a dozen Farnols --- "The amateur Gentleman" - "The Money Moon" - "Black Bartlemy's Treasure" - "The Way Beyond" - "The Lonely Road" and, of course, "The Broad Highway" I have been roundly cursed for having cast out several Farnols that were handed down to my family.They are healthy, boisterous tales of Regency bucks, raven-haired beauties, dastardly villains and rugged footloose heroes who strode the lonely roads of England The characters who smite the anvils in the smithies, frequent the inns and seek shelter in rough barns are likeable rogues who speak in a rough but rich language.

The tales are heroic and romantic, full of fighting and adventure.. but no four-letter words, no fevered bedroom scenes and certainly no explicit sex. animal passions are strictly confined to the villians who threatened the heroines with unmentionable fates. 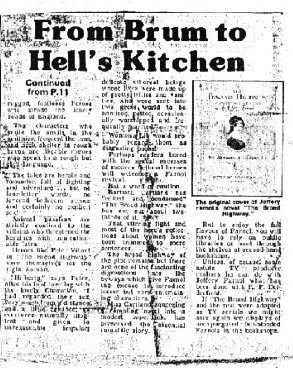 Heroes like Peter Vibart in "The Broad Highway" save themselves for the right woman. "Hitherto," says Peter, after his first meeting with the lovely charmian. "I had regarded their sex very much from a distance: and a little askance: as creatures naturally illogical and given to unreasonable impulse: delicate ethereal beings, whose lives were made up of petty trifles and vanities, who were sent into this gross world to be adnired, petted, worshipped and frequently married."

Women's Lib would probably regard them as disgusting books. Perhaps readers bored with the sexual excesses of modern fictional heroes will welcome a Farnol revival. But a word of caution. Barbara cartland has "edited and condensed" "The Broad Highway. She has cut about two-thirds of it. That stirring fight and most of the hero's reflections about women have been trimmed to mere sentences. The broad highway of the plot remains but there are none of the fascinating digressions into the byways which give Farnol the excuse to introduce lesser but very entertaining characters.

Miss cartland squeezing a rambling novel into a modest paperback has preserved the essential romantic story. But to enjoy it to the full flavour of Farnol, you will have to rely on public libraries or hunt through the shelves of second-hand bookshops. Unless, of course, some astute TV producer realises he can do with Jeffery Farnol what has been done with R.F. Delderfield.

If "The Broad Highway" and the rest were adapted as TV serials we might once again see displays of unexpurgated, full-blooded Farnols in the bookshops.

For More Information, an appreciation society can be found at the following address. http://cres1.lancs.ac.uk/~esarie/farnol/biblio.htm