24 Hunters Vale: Written by Fred Horton - Submitted by Reg Horton (on behalf of my uncle) 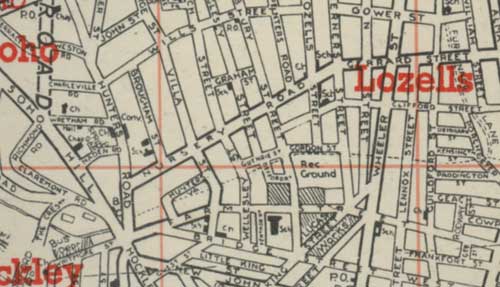 24 Hunters Vale was in the district of Lozells in the parish of aston. Hockley brook was the boundary between aston Manor and Birmingham.
Hockley brook ran at the bottom of the gardens of the houses. 24 and 26 were a pair of houses and were joined to 22 and 28 although they were not part of the terrace. 24 had an entry on each side as the bedrooms went partway over each entry they were much larger than the rooms down stairs. They were big enough to hold two double beds which they did.

There was a small pantry about three feet by four feet. The space was taken up by an old gas cooker, which was loaned from the Birmingham Gas Department, which most of the poorer families had to do?
The stairs to the bedrooms and steps to the cellar went from the back room downstairs. The floors downstairs were wood in the front room and quarry tiles 9 x 9 inches, the back room, they were covered with linoleum, turkey red, I think the pattern was called, when money was short and lino had to be renewed, congoleum was used, this was printed tar paper and did not last long, the pattern wore off in a few weeks, it was only the back room that it was used in as the front room hardly ever wore out.

The bedroom floors were scrubbed, with just a couple of rugs. These were often pegs rugs, made from old clothes cut into short strips and pegged through hessian, a sugar sack provided the hessian.
Re-cycling is not new

coal for the open fire was kept in the cellar and was delivered via the cellar grating.
The lighting was by coal gas, fish tail burners upstairs and burners with mantles downstairs, the gas meter was also in the cellar, as it was a quarterly meter it was read every quarter, and when the gas man came because it was a wet meter he would drain it down and refill it with clean water, the smell of the old water was terrible, and would linger for days.

There was no hot water in the house, the tap was in the wash house across the yard, cold water only, if hot water was needed it had to be heated on the fire or gas stove. The wash house was often called the brewus so called because people often used to brew their own beer in the boiler.
This was particularly the case in the black country.

Past the wash house was the toilet, a flush arrangement with a boxed in seat made of wood, which went from wall to wall with a hole over the pan.
Then there was the ash pit often called the miskin it was past the toilet, as far away from the house as possible, the dustmen had to shovel all the rubbish into a bath, they then carried the bath on their head up to the cart and tipped it in, if it was a windy day the ashes would be blown away to the annoyance of anyone with washing hanging out to dry, or passer by who would have got ashes in their eyes or on their clothes.
a kettle was always kept on the fire in the back room, the fire would be stacked up with slack or old boots last thing at night in an attempt to keep it burning through the night, keeping the chill off the room at least.

Having a bath was very difficult, because, first of all the bath had to be brought in from outside, where it hung on the yard wall, then you had to carry the water from the brew house into the house room. The water was heated in a big iron pot on the fire in the back room, as a last resort a big pot would also be set to boil on the gas cooker
children would have a bath in a small oval zinc bath in front of the fire. Grown ups would have their bath when others where out or had gone to bed, they used the long zinc bath. as all the water had to be brought into the house and then carriedut again having a bath was a laborious business. Sometimes the bath was taken into the wash house, and the water heated in the boiler in there, but this was only in warmer times, water had to be shared as it took to long a time to heat another bath full.

The boiler in the wash house was usually used for washing the clothes, which were always boil washed, then they would go into the big tub to be pounded with the maidin stick (some times called a dolly).
There being no such thing as washing machines with programmes for washing delicate fabrics etc in those days or come to think of it no such thing as delicate fabrics either, clothes had to be strong and wear well. The water was always heated by a fire on which anything burnable was used for fuel, everything from slack to old boots, shoes and odd bits of wood. But at christmas time the boiler would be scrubbed out and the christmas puddings would be boiled in there.

The iron self from the oven of the range type fire in the back room was often taken out and wrapped in a cloth and put in the bed as a bed warmer. a brick was also used for the same purpose having been heated first in the oven.

In the back room was a sofa or chaise lounge it was upholstered with a black material and stuffed with horse hair which stuck through the covering and was very painful to sit on especially for little boys in short trousers.
at one time the front room was only used on Sundays, being the poshest room in the house and the one where we had an upright piano which was played by my sister dolly. There was also an harmonium which dad played. It was only used to play hymns. also in the front room was a chesterfield suite upholstered in green Rexine.

When the girls were grown up the front room was used more often. Particularly on Friday nights when their boy friends and my dad would play cards. Solo whist was the preferred game needing just four people, occasionally pontoon would be played if more than four people wanted to play, usually this was when my eldest brother alf, stayed in.
Later the young men put together and bought a half sized billiard table, it was much to large for the room and one of the cues had to be cut down to enable shots in front of the chimney breast and the piano to be played.

Built in cupboards were in the alcoves on each side of the fire place. On one stood the model of a cottage in a glass case, the history of which we never knew we were told that's Dad’s brother had made the it and it was the model of a cottage where they had once lived but no proof was ever found and where its location was is still a mystery, I do remember all the children being told that an old woman lived in there and if we did not behave she would come for us.
Many an hour was spent watching but no one ever saw her.

We always had tea in the front room on Sundays, salon was often the special treat, along with jelly and evaporated milk and other things like tinned fruit that was not normally eaten on week days, the table was spread with a chenille cloth and then a white linen cloth on top, what a change from the scrubbed wooden table in the back room where either an old linen cloth served on week days or even the local evening paper if the second best linen was dirty and was being washed.

If I could get into the room at mid-day I would play the two end black notes on the organ which sounded like the early aeroplanes, and the women coming out of work from Firmin’s would look upwards to see if they could see the plane which was still something of a rarity.

Family parties were held, all my brothers and sisters would be invited, on recollection I cannot remember my fathers relations ever coming, when we saw my fathers brothers it was when we visited them, usually on a Sunday morning.
at a party there would be singing and dancing, it was a wonder that the floor with stood dancing as it propped up with timbers, as every one came by tram or walked the party would finish in time for all to get home, and as they were always held on a Saturday there was always a chance for a lie in the next morning.

The end came when floods took their toll and all the houses on the brook side of the Vale were demolished and new maisonettes were built, when we left no 24 we moved to the other side of the vale to no 35