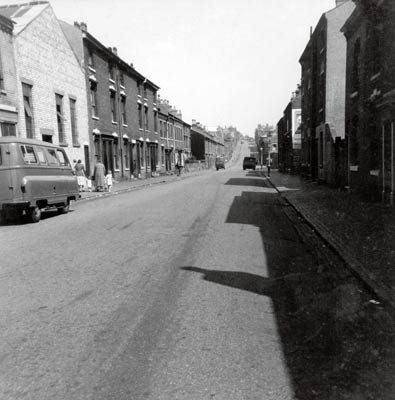 4 back 41 Guildford Street by Hazel McMullin

My Grandfather was John George Pratt, the fourth of George Guy's five children. He married ann Maria (Ria) Hall at St Peter and Paul in 1908.

at one time they lived at 4 back 41 Guildford Street. They had 15 children of which 2 daughters and 10 sons survived childhood. Mum told many stories about growing up in the area. I wonder if anyone knew the family or can remember this incident.

The brothers used to collect broken bicycles to renovated for their own use and to hire to others. Jack (John George) had won a scholarship and was riding his bike to his new school when he caught the front wheel in a tram line. His leg was badly injured he was in hospital while a plate was attached to his bone.

The house the family lived in only had two bed rooms, the boys slept in the second floor room above their parents room. The youngest babies slept in a cot at the foot of parents bed and part of the room was curtained off for the girls. When he came home from hospital Jack was still bed ridden for a while. His mum took the ends out of her sewing machine cover and placed it over Jack's legs to keep the weight of the blankets off his injury.

Jack must have been bored and spent time reading in bed. There was no electric or gas lighting so Jack used a candle balanced on the makeshift blanket cage. The machine cover was domed so of course the candle fell and unfortunately his book caught light. Soon the bedroom was alight. Luckily a neighbour was in the court and heard Jack scream. He saw the flames and ran into the house and up the two flights of stair passing Jack's mum. He threw the burning bedding through the window, hoisted Jack over his shoulder and carried him down to the parlour where he stayed until he was able to get around unaided. Jack was eventually fitted with heavy metal and leather callipers.

My great grand father George Guy Pratt was born in Warwick where his father was the Parish clerk at St Nicholas church. George moved to Great King Street and married Kate chambers in 1879 at St Matthias church.

One of my cousins found this which looks like a church magazine cover as you see it mentions the Verger being Mr Pratt. Unfortunately there is no date shown.

Does anyone know when Revd V H Patrick served at St Matthias?

East of Eden by Michael Ingram

Eden Place was a court on the east side of Guildford Street half way between Geach Street and Farm Street. The entry leading to the court containing six back to back houses was between numbers 14 and 16 Guildford Street. My grandparents, Harry and Kate crompton moved to number 6 Eden place sometime between 1901 and 1914. I was born in 1941 but I knew the house well. The Bagleys lived there then; Mr and Mrs Bagley, two sons and a daughter. The eldest son, Duncan was one of my childhood friends. It was a typical back to back; downstairs a small living room; a tiny scullery at the back with a sink, little more than a cupboard; one bedroom on the first floor and an attic bedroom above.

During the time that my grandparents lived there they had at least four children, possibly five. My uncle Ran, the eldest, not quite 16 in 1914 joined the army with his friend alf Ingram from 169 Wheeler Street. My mother, Doris was 15, alf, 4, Harry, 1 and Sid who was born that year. There had also been Victor who was born in 1900 but I don't think he survived till 1914. There were others whose names I don't know; about six; they all died in early childhood. My grandfather also went to war leaving my gran with my mother and her three youngest brothers living in the house.

after the war in 1922 my mother Doris crompton married alfred Ingram. 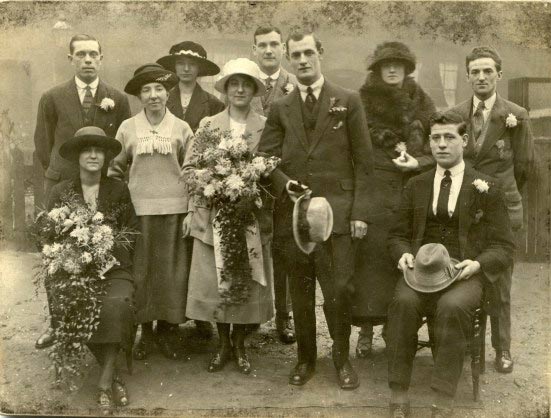 My parents' wedding photograph it was taken in Eden Place. at the top of the photograph at the right you can see the entry with a lamp above it. Moving left is number 5 and on the right is number 6. The woman to the left of my mother in the picture is my grandmother Kate crompton. The man at the back between my mother and father is Thomas Lawley, brother of Sid Lawley who was the greengrocer in Farm Street in the '40s and '50s, (next door to c.V. Bull, the butcher on the corner of Farm Street and Lennox Street).

The young woman sitting at the front is cissie (Elvira) colesley. She worked with my mother enamelling brooches at ashford's in Great Hampton Row; the building is still there. My father was a horse drawn bus driver; he had flue at the time.

at around this time my grandparents moved to Martley in Worcestershire. My parents moved into lodgings in New John Street West and in 1923 my sister Doris was born. They then moved into number 5 Eden Place. The family living at number 6 now were the Bluettes. Over the next seven years the family grew. alfred was born in 1924, Rene in 1927 and Olive in 1930. Mom and dad had the bedroom on the first floor, the children slept in the attic. When the children were older, a sheet was hung across the middle of the attic to act as a divider. 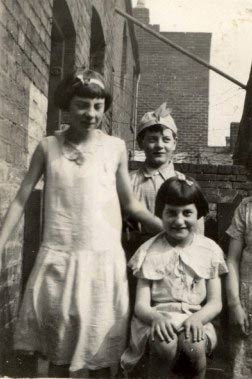 Doris, alf and Rene Ingram
outside number 5 Eden Place
waiting for the party to start 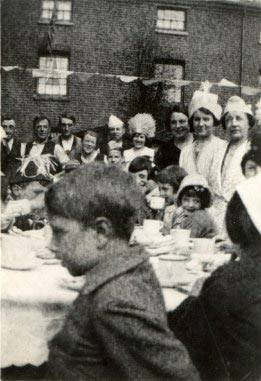 The party is underway
Doris Ingram, my mother is second from
the right with the party hat 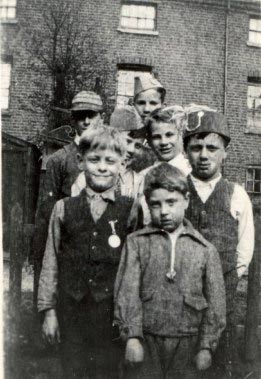 Unidentified group of boys
with my brother alf
peeping from behind 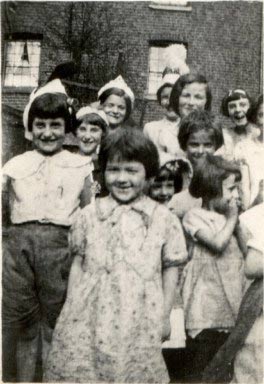 Group of girls. My sister Rene is on the far
left and my sister Doris is on the right at
the back, laughing.
It is interesting that the boys and
girls were photographed separately 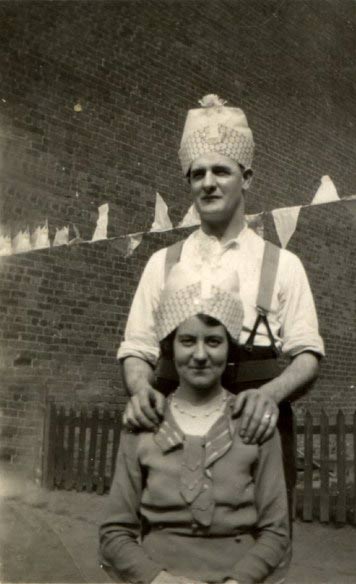 alf and Doris Ingram, my parents
The enormous wall is the back of the houses
from the next court down, 'the Barracks'

Some Other Photos from Eden Place 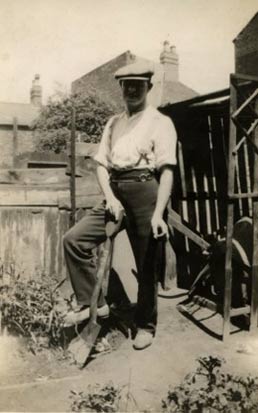 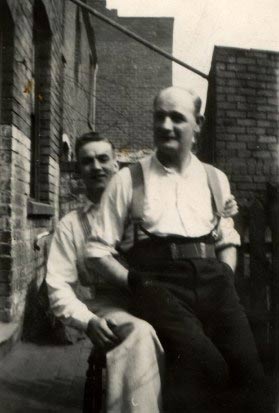 alf Ingram and a neighbour
outside number 5 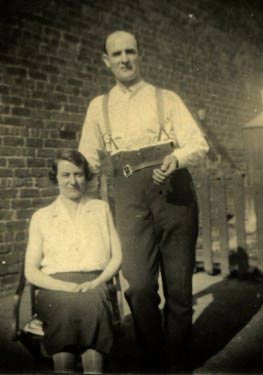 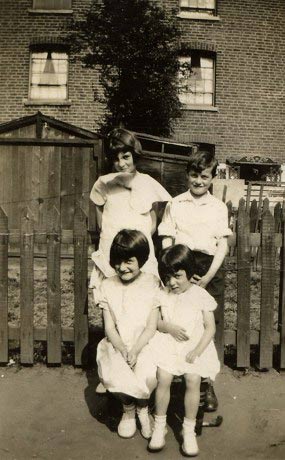 clockwise from top left
Doris, alf, Rene and Olive Ingram
Notice the decorative porch over the
doorway at the back
That was still there in the `50s 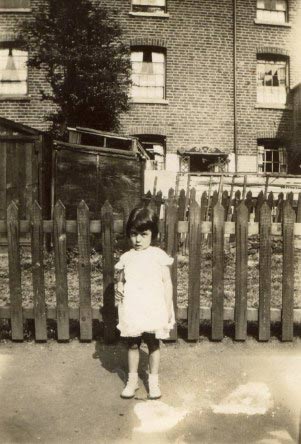 The diagram shows the positions in Eden Place where I estimate the photographs were taken.

By 1941 the Ingram family had left Eden Place and had moved to 26 Guildford Street. From the three roomed back to back they now lived in a house with its own private back yard and garden, their own outside toilet, a kitchen with its own copper boiler, a living room, a front room, and four bedrooms. No bathroom or hot water but it must have been like a dream home.

I was born there in June 1941. By the time I was about five or a little older I would play outside our yard in the court at the back of the house. The court had no official name other than 4 court, however, everyone knew it as 'the Barracks'. It was a large court of twelve houses. The 1901 census lists 16 houses but I knew only 14. My friends then were Johnny Wells who lived in the Barracks and his cousin Duncan Bagley; both the same age as me.

The houses in Eden Place were back to back but they all had gardens surrounded by palings. Most were cultivated as they were when my family lived there; flowers and vegetables, dug for victory. The Bagley's garden was bare earth, a playing area for the two sons and friends. I don't think Mr Bagley was keen on gardening. The elder sister was older than we were left home in her late teens. There may also have been a baby girl but I `m not sure. We all played there sometimes and also in the drying grounds but mostly we played in the Barracks or in the horse road with other children.

The court was quite long, three houses each end. along the right hand side facing away from the entry, against a high wall were the outside lavatories and the brew house. above them there was a workshop reached by wooden stairs; I never new what the workshop was used for. as far as I was concerned, the stairs were for playing cowboys and Indians. The paling fences were where we tied our imaginary horses and the Drying Ground was the great plains where the possie would ride.

The Drying Ground was a large empty space in the centre of the court, used on Mondays for the communal drying of washing; it was where the coronation party had taken place. Each year on November the 5th there was a bonfire on the Drying Ground. This was the case in courts all over Birmingham at that time. On VE day the bonfires were burnt in the middle of streets. On the days around bonfire night families hid any thing that was wooden outside their houses, especially the washing line prop otherwise it would become part of the bonfire. On the night of the bonfire we kids would be wearing our knitted Balaclava helmets and have our pockets stuffed with five shillings worth of fireworks. In the time leading up to bonfire night we would park ourselves at the corner of Guildford Street and Farm Street, outside Mather's pawn shop to collect pennies for the guy. I don't think we collected much.

One year when we were approaching our teens and preferred bangers to sparklers Duncan put a banger in a milk bottle and stood by to see what happened. Of course, he was taken to hospital but was lucky. The glass didn't go into his eyes but it was close and he had stitches.

My parents had close friends that we often visited. Horace and Ruby Mobley. The Mobley's lived in Kingstanding and had a television early in the `50s. They always had the latest gadgets to enhance viewing. at one time it was a massive piece of thick plastic shaped as a magnifying glass, strapped in front of the television screen. Later a piece of plastic fading from red through green to blue which was fixed in front of the black and white television screen intended to simulate coloured television. I now know that that the friendship had begun in Eden place. In the '20s and '30s they lived at the other side of the entry to my parents.

Some of her family had emigrated to australia. In the early '60s and  in her mid eighties she went out there to visit them. at the time I knew her she lived at the top of Guildford Street near Lozells Road. I now know that she had once lived at the top of the entry to Eden Place at number 16 Guildford Street and had been a family friend since the `20s.

There were also the Sydenhams who lived in the house at the back of number 6.

as I and my friends grew older as the '40s ended and the '50s began, our Eden extended out into the whole of Guildford Street and beyond. Its boundaries became Wheeler Street in the west, Lozells Road in the north, Farm Street in the south and Newtown Row in the East. and of course this included the cinemas. Johnny and Duncan would go to the Globe in Newtown Row but I rarely would. It was either the Orient near Sixways, The Villa cross at the end of Lozells Road or the Palladium at Hockley Brook. I think it was the Palladium where I saw James Dean in East of Eden. I was well into my twenties when I read the novel. In the early `60s I was the only one living at home with my parents. after my father died in 1963 my mother got an exchange to North Walk in West Heath and I went to art college.