Our own aston Born Genius George Flanner by Stan Wood

This true story is about a friend of mine named George W Flanner born 13 February 1925 in a back house in Walmer place 3/192 aston Brook Street.

Later on they moved up in the world to a double house 194 at the front with a back garden. He was the youngest of the family he had a sister Eva and two brothers Louie and Frank, his mom alice, and dad Bob, who worked at the Dunlop for many years as did Louie and Frank. 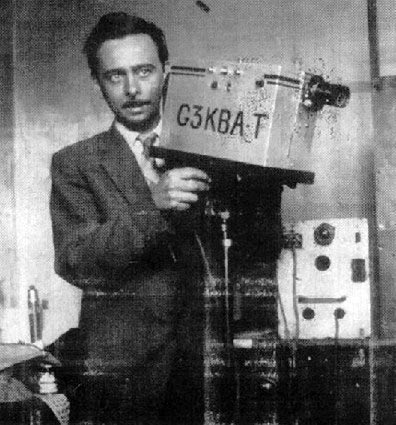 I met George in 1954 he was a brilliant self taught electronic inventor, light years in front of his time, he went to Burlington Street School, a poor scholar too busy with his radio's. He joined the boy scouts 226th group St. Stephens Newtown Row aston, but he did not like taking orders especially off the troop leader who happened to be his brother Frank, George always had to be the boss, as he was later in life.

In 1939 at the outbreak of the war he got on his bike and became a police messenger all through the blitz bombing he had no fear, one day during a lecture the officer said they were now transmitting on FM to stop the public listening in but George shouted out 'arm but I can hear you" they were dumfounded when he proved it he was offered a job with them. Later on he worked for The Monitor Radio co. busy making secret clandestine radio equipment for the war department. after the war he started up on his own as G. W. Flanner repairing radio's and T. V sets at home in the attic he could find the faults like lightening and if he thought they were not worth repairing he slung the chassi's out of the attic window into the back garden.

He told me he and his wife started work in the market's with a tray hung round his neck selling needles cottons and buttons, many years later his son John owned the allied carpets. Mrs. Flanner used to have a very long list of resistors, condenser's, valves & surplus radar units ect. To buy for her son, old Johnny liked her she was a big spender.

George was very busy building video recorders, remote camera controls, smoke alarms, Video by phone he built his own T. V camera and transmitted live pictures. The picture above shows George in action in the a.T.V studios aston cross. I had an O.a.P customer that I rented a TV to she lived near George and one day she complained that it used to change stations on its own and make some funny noises a quiet word with you know who soon cured it, but sadly like most geniuses he was a very poor business man, I met him a few times in my pals shop Billy Warrel's Radio Bracebridge St.

Bill was a good friend of his he used to send him round to my shop on his old bike for cut price radio valves one day he did not have enough money with him so we swapped a valve for a dozen eggs that he had bought off bill who used to keep chickens in his smallholding in Stourport. George later started up in business with two partners his pal next door neighbour George Tidmarsh and john smith calling themselves F.S.T electronic consultants Bill told me that the head men at Millers lamp factory I believe it was once owned by the German firm Mullersi paid George a lot of money to work for them on his new inventions they supplied him with an office and plenty of free food vodka cigarettes plus a very young beautiful secretary to keep him Happy. Bob set his own hours to work he only lived Just round the corner so he was in his oil tot but they had an ulterior motive they asked him to go to their German factory behind the Iron curtain but he did not fancy that in case he could not come back home I did not see him again, and do not know if he ever went over there.

I later learned from his brother Frank who has been a great help in putting this story together he said George was looked after by the excellent local Dr Kelly who called most days to see him but sadly George could not cope with the heavy burdens of business and chronic asthma and diabetes that he had suffered with all his life and sadly 28 February 1969 he took an over dose and passed away at the young age of 44, what if he had kept that cushy job at Millers maybe he would still be here but George could not take orders he always had to be the boss 11 he would have been a Bill Gates and a multi millionaire if he had lived what a sad loss for Frank and his family, his pal George Tidmarsh who lived next door, and all his friends he must never be forgotten. God bless him

Stan Wood makes an entertaining article in his addition to your website in respect of his knowledge about George. I concur fully with his article as whilst I had connection with George right up to his untimely departure.

Whilst I only knew George and nothing of his family or private life, 'Thank you Stan ', I knew only too well of his illness and his battles to overcome them. I could well have met Stan because some years before Stan must have lost touch, there was hardly a day which I did not visit Bill's shop on the way through. 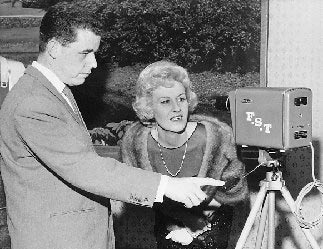 at that time George had been working on what I can only describe as the miniaturisation of a television camera, considerably smaller than the one featured on the picture supplied by Stan, it was around this time he attended, what we call today a Seminar, a large number of very eminent technicians of the day were also there George the man always looking forward gave voice to this assembly in that he saw in the future the demise of the ordinary camera and we should be using a hand held assembly which took both still pictures and moving images.

an eminent member from the technical department of the BBc listened to George then gave a reply, I think this was something in the term that he was well aware of George's capabilities but this time he had not given thought to the tremendously high frequencies and other considerations that would be required to make it possible and it was all pie in the sky.

Soon after this event, myself being involved in both engineering and electronics, George approached me, explaining at length that he had realised that a basic screen of moving imaging data contained a large proportion information that didn't change. I am trying here to explain his findings here in the simplest terms so that it isn't boring and is understandable to non technophobes.

Remember we are in the mid fifties when, straight out of the box, most electronic equipment needed a friendly slap or tickle to ensure it worked. George ask for a little help in the supply of parts and equipment which I gladly gave him, low and behold he produced a working camera and he took a picture of a large cross on a white background, transferred the image via a domestic tape recorder and then to a standard television screen, panning the camera across the subject and explaining to me the thinking behind his ideas, I did have some camera shots of this event but unfortunately over the years they have been lost, however the following week the whole event was reported in a Saturday edition of The Evening Despatch occupying a full half page.

also in the same article was mention of a new idea of George's of what he called a presence alarm, to us today a (smoke alarm). In which the Birmingham city Police were interested. To my knowledge this was the first time any such product had been mentioned either here or abroad. No doubt this would all be researchable.

a few more words about George Flanner by Bob Disdell

I worked at Enots in the sixties and was fortunate to know George. as chiel development engineer for the company we had a lot of electronic equipment and through an uncle of mine who worked at an Engineering company, F Prime and sons aston Brook Street got to know him.He would borrow bits of electronic gear from me and would take it apart to see how it worked.I also saw the small camera he had developed.

He came to see me one day and explained the doctor had told him he must give his electronics passion a rest,he would often work several days without sleep sorting some electronic problem out. He asked me if I could enquire if there was a job at Enots in say the warehouse doing say packing so at least hed got some money coming in. I had a word and the personell dept found him a job to start the following Monday.

He never arrived but some weeks later I bumped into my uncle from F Prime (Geoff Rogers)and enquired about George. It turned out George had sadly passed away a week or so before.The man was an electronic genius who was never recognised.

My Uncle Geoff Rogers was a friend of George and the company he worked for often made parts for his camera. He borrowed a voicetape recorder from my uncle and I understand converted it to record and playback video,he gave the recorder back and it spent the rest of its days in my uncles loft.

My Uncle Geof Rogers lived in anstey Road,Perry Barr and lived to be 97 years old,he passed away about 18 months ago. Strangely enough I was born in aston Brook Street.