Joyce Here! Where Do I Start? by Joyce Toon

Well I was born in the top of Hospital Street in October 1939, the start of the 2nd World War. My father was Samuel Toon. born to William Toon and Leah Toon along with two brothers albert and Bill short for William. They lived in Wellington Place, Hospital St. William was a tailor he made garments for both men and women he had a shop in New John St West, called Toon's Tailors This was before the1914 /1918 war. William was killed when my dad was 4 years old, he is buried in France.

My mother lived in Ryder St in the town. Her father and mother were named Sid and Elizabeth Worton. They had one girl and four boys Jimmy, Frank, alfred, and Phillip ho was killed in the great war, missing never found. My mom and dad had seven children, six girls and one boy there was Jean, Joan, myself Joyce, Janet, Sam, Evelyn, and Susan, we were bombed out just after I was born. Mom lost everything. Joyce & Ray

We moved to 68 Geach St, we rented a house from a builder. The house had a garage on the side, with doors at the front and a door at the back that lead in to the kitchen, which was once a stable. It had still got the stable doors on it, that opened onto the yard, which were replaced by a window years later. We were not supposed to go into the garage, as the builder was still using it, but we did. We had rides on is Hand cart, Mum didn't even know.

Geach Street was off Summer Lane, Guilford Street was the other end, and Rodway Street was a quarter way down. Over the road from us was this building were they stored the grates and bottles for Holts dairy, the dairy itself was situated in cowper Street.

Down the bottom of Geach Street there was a factory owed by Wallace Lawler. The plastic factory where they made Dishes, and Dummies for shop displays, what the blouses and bras were displayed on. They also made lamp shades and electic lamps. I can remember his father in-law would do the art work on the shades. I worked for him after school in the evening, taking all the parcels to the Post Office on the corner of Newtown Row. I did that for three years, and I learned how to make shades. I remember his wife having twins, one died which was only a few months old.

My mother used to make toffee apples and sell them, and she used to sell bundles of wood. Me or my sisters went to Lillies Wood yard in Summer Lane, for wood. We used to bag it ourselves and take it home. Mom, dad or my brother would chop it up. We put the wood in bundles, wrap elastic bands round it, then we had the job of going round selling it. I also had the job of fetching the coke, every Saturday morning in winter, from the gas works. I hated it but we had no choice. I go out in the snow with the old pram and no gloves, we put our socks on our hands, two pairs on our feet! Mum gave me two Penny's to buy hot chocolate and dripping on toast on the way back. Very often the dammed pram would break down, I used tie it with string and make my way home to the warm fire. The "Good Old Days" as we say.

The neighbours use to sit out in warm evenings, chatting. We used to sing songs to our mom, and neighbours would talk about old days, the things they went through. There was Mrs. Overton the bookies, she never lived there, she lived in Handsworth. I cleaned for her, made her coffee it was champs. I use to get her a cooked dinner from a pub on the corner of Milton Street, or Sandwiches from a cafe in Summer Lane. Next door to her was Mrs Towsend, then Mrs Timmins, Mrs Gossage, and Mrs carter, when she left the Johnsons moved in. Her daughter Brenda Johnson is married to Brian Harding the Summer Lane Kid. 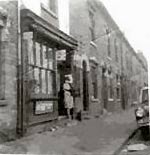 Next door was Mr Ford with Pat and Maureen, his daughters. I was Pat's bridesmaid. Next door was Mrs Matthews, then 2 doors away was the Leatherbarrow, Mrs Williams, then there was old Mrs James. I looked after her and did here shopping, cooked here food and put her porridge ready for next morning. I use to sleep over some times when she got really sick, sadly she died.Next door to us was Winnie and Fred Wayne. Fred took my wedding photo's, he developed them himself but they never turned out, so I have never seen my wedding photo's, so sadly I have nothing to look back on

Then there was Mrs Evan's the back of her was her mother, Mrs Owen. Next to Mrs Evens was the Worton Family granny Worton would help out at the birth of babies. When they moved, Mrs Morgan moved in next to them was Mrs Grimes behind them was Mrs Mew, she had three children the one son Brian had a wonderful voice, he took off al Jolson, he would paint is face black, he did a show for the Summer Lane school, he was great singing mammy. I wonder how many would remember him?

By him lived Mrs Evans, daughter in Law, and at the end of the road was another storage place for the dairy where they stored more crates. That was on the corner of Rodway St and Geach St on the other side was Butlers Outdoor. Further down past the shop chicks was the carol twins alma and christen. They lived over I remember the street parties, big bonfires. I can remember Mr Whitehouse coming round lighting the gas lamps, there was a dead end wall. We played Rounders, Hop-Scotch, Top and Whip. I went to cowper St Nursery when I was four years old, then cowper Street Infant School. Then good old Summer Lane.

Joyce
at the Likey Hills1959

another job I did was to go to Snow Hill, to get the meat for my mum before I went to school every other morning. I walked there then got the bus back. On the bus who did I see? Mr James the head Master he said "Don't be late for school" Most times I was, he would say "You can go I now why your late". We went to church, that was at the bottom of Geach Street Facing the Geach pub wear I went looking for dad many times. Sunday School, church in the morning. Sunday school in the afternoon, church in the evening. Sunday school in the afternoon, church in the evening.

Mom bred her own chickens, made own mince pies and puddings, she boiled the pud's in the wash boiler! and she made christmas cake. We did the trimmings for the tree, we made the paper chains and out of the woodbine packets we made little handbags and painted them. They were to hang on the tree. We had candles on our tree very often the tree set on fire. We would hang up our pillow case, we got an orange and apple, a tangerine a half a crown, sweets wrapped in coloured paper. Small toys, like games, John Bull printing sets, annuals, books. snakes and ladders. We loved it, at night we put on a play for mom and dad and sing carols. We were always grateful for what we got!

Now the old Geach St as gone. I can remember going to visit mum, when I was married which was Birmingham registry office Newhall Street on christmas Eve 1959. as I said about visiting mum they were knocking down the houses across the road all the neighbours had gone, and you could see into Porchester Street, it made you want to cry. When dad and mum moved to Kimble Grove off the Tyburn Road, we did not want to go back to see them knock poor old 68 Geach St down.

Both my parents have gone, also my brother Sam and sister Joan both at young age.

all the stories on this site are full of magic, but for me, this story from Joyce is one of the most poignant. It was one of the first stories I read on here and although you can't see me there, I feel part of this story; I'm there in the background, just around the corner..

I lived around the corner from the Toons, in Guildford Street. For me and all other children in the neighbourhood, one of the highlights of the year was the arrival of Summer and with it the arrival of the toffee apples for sale at the Toon's front door.

We kids would queue up there, mouths watering, pennies in our hands, waiting eagerly as Joyce or her mother arrived at the door carrying a tray of freshly made toffee apples. I can still taste the sticky apples and feel the crunch of the toffee in my teeth. Food was never so good.

I remember little Tommy well. We were not friends, he was younger than me and you didn't mix with younger kids  but he and his family were part of the heart of Geach Street. It is so sad that he is gone.