This is a true story about my old pal Frank Griffiths a Real Brummie who I first met in George Dockers radio and T.V shop 124 Park Road aston in 1952.

We became life long friends, he was born in 1916, in a two roomed and an attic back house, up the "hilly yard" in Bath Street near St chads cathedral Birmingham. There were eight families living in that yard, with 20 children running about. Four outside lavatories shared between them, that used to freeze up in the winter, and two brew house's where they all used to take it in turn to do their washing. There was only one outside water tap for them to share

The houses were all Kept spotless, they had no electric or gas, just paraffin lamps and an old fireplace that they cooked on. Later they had the gas put in and lit up the house with a gas light with a mantle, oh how fragile they were. They cooked on an old black Jubilee cooker at the top of the cellar steps where the coal was kept, and the gas meter in the pitch dark. What a game to put a penny in it by the light of a spluttering candle, and what a scramble when you dropped the penny in the coal you came back up looking as black as the coal.

They could not afford a chimney sweep so they posted look outs for the cops, and then fired the chimney by making a big blaze of paper and paraffin in the grate then set fire to the chimney, that brought the soot crashing down. The streets were covered in pitch black smoke, then when the cry went up "copper's!" they quickly threw water over it and put it out, so every thing was ok. When the cops came, the answer was, "not us mate, must be up another street".

There were many fight's amongst the kids in that yard but Frank was a big chap and he more than held his own. He took up amateur boxing at 11 stone and won most of his 200 fights, and did part time work as a chucker out. They did not come back for more! When war broke out, he joined the R.a.F and became a P.T. Instructor. When he was demobed he worked at Lucas, and boxed for them winning many medals, then he worked for the M.E.B. as an electrician. He had a great lot of contacts and started up on his own, wiring up houses and shops.

Later he went into the timber trade, and then he opened a hardware shop on the Stratford Road Hall Green, his must have been one of the very first d.i.y shops. You could get anything off Frank; from nails, screws, paint, brushes, many electrical fittings all sorts of tools and wood cut to any size, while you wait. He supplied all the wood and fitted out my first shop at Tower Radio, 44 Upper Thomas St, aston (1952) and over the years we had many good deals.

We must have drunk gallons of tea when he told us stories of his life he was a proper comic, he helped one of his sons to start up a hardware shop he did ok. Frank also had a shot at bookmaking, opening an office opposite Drews Lane, near to the Bromford pub. He could not compete with all the resident bookies employed at the car factory, who got good wages and could lay off their bets, so he sold his pitch to an Irish chap, and carried on with his busy d.i.y shop.

He built an excellent extension on his house 374 court Lane Erdington, and a modern kitchen, every room was painted and decorated and made like new. Frank was a perfectionist, he never seemed to stop working on his house

One day I needed a National Vatric vacuum cleaner motor, for a repair I was doing and Frank introduced me to his next door neighbour at 376 court lane, Joe Bailey the king of the re/conditioned vacuum cleaner world. We became life long friends and I packed up repairing t.v.s and radio's and went into the vacuum cleaner business in a Big way. With Joe's help, and all his contacts, we used to shoot off in his pride and joy, his old blue and cream Morris Oxford car that he kept in good nick.

On Mondays our first stop would be the Electrolux depot in Freeman Street to buy all the part exchange vacs that their door knockers had bought in. after sorting them out Joe would make them a cash offer for the lot. If they turned their noses up he would say, I will make you one more bid and turn on his heel and say, "I bid you good-day" They usually called him back, then next day we would go to see Mr.Trevor Pearce the main Hoover dealer on the Stratford Road, Hall Green, bidding for his part exchanges. I liked him, he was quite a character, but he did not stand for Joe's good day bid.

He fixed a reasonable price and always spun a coin for the odd few quid, the winner had to buy the cakes. We had some good vacs off Trevor. We then used to trawl around all the large shops buying up their old cleaners, by then we were loaded, and shared them out between us. any not working, Joe would give to me, and I would usually get them working again by breaking some up for spare parts. We did very well, I used to recondition them and sell them all lined up outside my specialist vacuum cleaner shop at 296 Lichfield Road, near the aston Railway Station. Fully guaranteed, in good working order starting from three pound ten shillings they went like hot cakes, the only trouble was getting them, you had to buy loads of old junk to get some decent ones a good job Joe had some good contacts.

We are still in the vacuum cleaner business, today my son Phil has took over my shop, Tower Vacuum, 10 coton Lane Erdington, now I have retired. When Frank eventually retired he went to live in aldridge, but he still used to come to my shop in Erdington regular for a cup of tea and a chat about the old days, had us all in stitches...., Phil, Sylvia, and me.

carl chin had him on his show one Sunday talking about his life story, I taped it for him he was delighted with it, he gave me a poem he wrote about where he was born near St.chads cathedral Broad Street I am enclosing it with this story, and a nice poem his son wrote for him on his 80th birthday a lovely gentleman but sadly he is in poor health since his wife Nell the love of his life passed away I do not see him now, but he is often in my thoughts god bless him.

I hope someone who reads this may have an old photo of Frank so it can be included with this wonderful story.

We look back all those years ago
and always think that time goes slow
We forget about the things we've faced
and realise that time has raced
Some people sit and waste away
and never move from day to day
But I know a man who's always moving
Who never ever stops improving
He's seen it all and wrote the book
So let us take a closer look
at the man who broke the bookie's bank
The legend that is "BIG BaD FRaNK"
His Lucas name was not skills taught
But of the skill with which he fought
His boxing craft loaned extra clout
When on the doors and chucking out
In the RaF' he taught PT
and he's even worked for the MEB
But the timber market found him fame
That's when "THE WOODMaN" was his name
When Mrs Bond provided room
It spelled her shoe shop certain doom
Her footwear business left on the shelf
and the shop re-named as "DO IT YOURSELF"
Now it's possible that his greatest vision
Was when he made his best decision
He managed to bag the love of his life
and took our "NELL" to be his wife
It didn't take them very long
To have two sons, both tall and strong
They knew the hassle would be double
But Frank can handle any trouble
Forever young and playing the clown
There's no sign of him slowing down
To draw a crowd he never fails
When spinning yarns and telling tales
So now you've had the information
Raise your glass in celebration
and wish the man we've all to thank "
HaPPY 80th BIRTHDaY FRaNK" 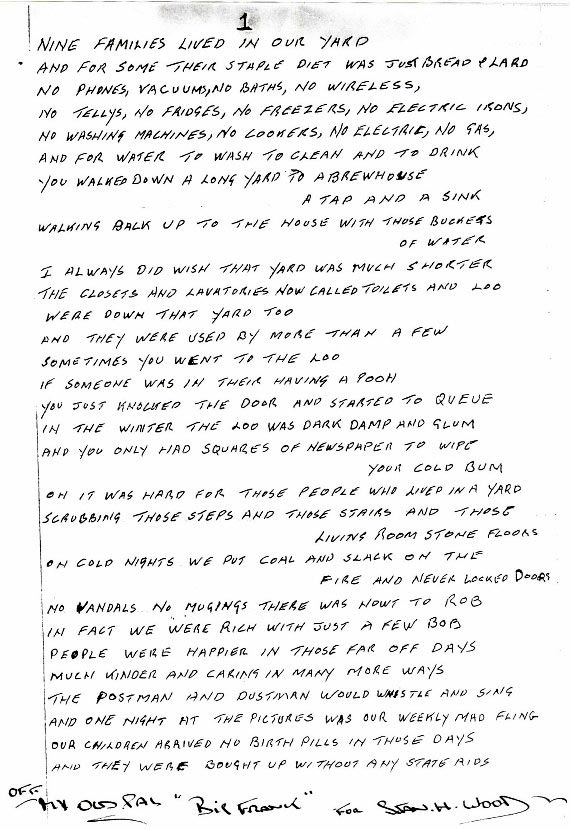 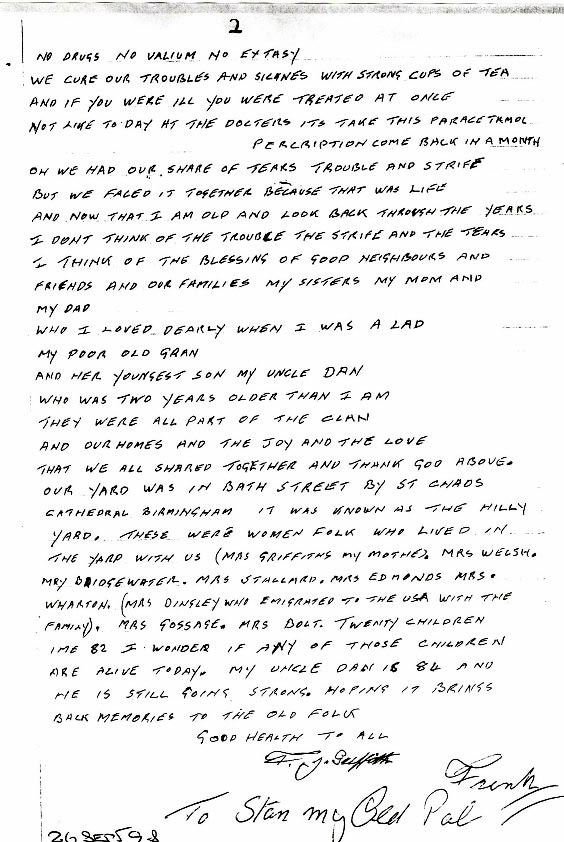