This couple would have been on the Titanic if Frederick had not been taken ill. They lived in Victoria Road 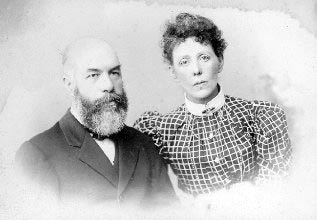 august 17th
Started two-o-clock Saturday very cloudy sky. car running very badly made very poor progress to Mansfield. Had a most exciting time getting through the market place, some thing like the Bullring on Saturday night stayed at the Midland Hotel very comfortable.

august 18th
Did not leave the hotel till two thirty, stopped to put the spark right, it only wanted a spot of oil. Had a very fine run to Wetherby arrived there at seven-o-clock. Had to put up there owing to the thunderstorm we stayed at Brunswick hotel.

august 19th
Left Wetherby at ten-o-clock both cars running fine had great difficulty getting through Newcastle so much traffic, took a wrong turning and went some miles out of our way, saw an aeroplane in a field. When in a most deserted part of the world Mr Twiggs engine began to roar, found the fan belt had broken. Had to proceed slowly to Otterburn quite expecting to put up there, we found to our dismay the only village in was full. Managed to secure two bedrooms in a cottage, had to leave the cars in the road all night, hope to goodness they will be there in the morning, there also five other cars staying it the road outside for the night.

august 21st
Staying here for the day, to see the place, well worth seeing went to Holyrood castle in the morning and Portobella in the afternoon, returning to Edinburgh in time for the theatre at night.

august 22nd
Left Edinburgh at eleven -o-clock, rather poor roads to Stirling through a lot of small towns, stayed for dinner about three miles out of the town. Passed through the most magnificent scenery across the hills, stayed the night at Weem near aberfeldy.

august 23rd
Left Weem ten-o-clock roads rather rough had a fifty-mile run across the mountains very wild and rugged, colouring beautiful surrounded by purple hills. Had a good luncheon about two-o-clock, spread the rug over the heather. Reached Inverness seven forty five put up at the Queens Gate Hotel, most swanky place but very comfortable.

august 24th
Did not leave Inverness till about twelve-ten due to the small repair to the engine, then made good progress to Fort William simply can't describe the scenery. Put at Stewart's commercial hotel, Fort William is a most beautifully situated place on the side of a large lake surrounded by mountains.

august 25th
Left in good time had a good run through Glencoe to Loch Leven, which we had to cross on a ferryboat, nasty work getting the cars across, charged fifteen shillings. after that had some terrific hills, Fred stuck on one the combined efforts of Mr Twigg and Glady's were not enough to help him up, fortunately another car came along and gave a helping hand, so we got over that difficulty. When we got to the top we revived our shattered energy's with a good cup of tea, after a good rest we started again with another terror in front but fortunately Fred managed that one, but unfortunately caught a bit of projecting rock and damaged the car, after that we reached the Bridge of Orchy safely, but soon after another mishap. Turned up the road to Oban, is very narrow two cars could not possibly pass in most parts. Mr Twigg turned to look at a waterfall and before he knew he was in a ditch, and he had to get the help of five men before he could get out, that made another long delay, so that we were twenty one miles from Oban when darkness fell. It was a most dangerous road very narrow with a mountain on one side and a very sharp bank of Loch awe on the other, as we were creeping along at ten miles a hour we had another shock, hanging half over the bank and just resting against a tree was a motor car the one door was open and if the occupant had been able to get out in time, but we managed to get a light and shouted but we could neither see nor hear anything, the solitude was awful. Fortunately when we had done nine miles we came across a country Hotel, the people were most kind, at first thought would have to go on to Oban another twelve miles. But they were most kind we found out afterwards that they gave up their own bedrooms to us, so ada Glady's and myself were in one room and Mr Twigg and Fred in another, we managed very well that way the name of the place was Taymuilt Hotel.

august 26th
Reached Oban safety and spent a few hours there had the water tap readjusted and one or two other little things put right. Left Oban four fifteen reaching Tyndrum eight-o-clock found only hotel full, had to be put up at the post office cars left out all night

august 27th
Had a twenty-mile run to Loch Lomond took rooms at the only place The Tarbet Hotel like a castle. Went to see Loch Katrine then tried to find Rob Roy's cave it was a dreadful walk the path was over grown, and after making several wrong turns, at last we found it. ada and myself content to see it from above .The two gentlemen and Glady's clambered down and crawled inside, also a lady staying at the same place. She said she intended to find the place or some thing serious would happen. almost lost the return boat to Tarbet reached the hotel with a quarter of a hour to dinner, had a terrible scramble to get ready for dinner but we did it with a few minutes to spare, met two very charming ladies here.

august 28th
Left Tarbet eleven-o-clock in glorious sunshine in a few hours we had left behind all the beautiful scenery, had to travel through a lot of black country. Saw the ship building on the clyde ran in to rain in Glascow, most dirty place. could not get through the traffic, Mr Twigg's engine stopped twice in front of trams. called for letters at the post office, rained all the way to abington where we put up for the night five thirty.

august 29th
Left abington soon left the rain behind scenery rather uninteresting for a few miles. Paid a visit to Gretna Green went to the old blacksmith shop, had a good run in to Keswick raining in torrents put up for the night at the Queens Hotel, found a lovely fire in the drawing room so made our selves comfortable.

august 29th
Left Keswick at eleven-o-clock still raining but clearer before we reached Windermere made slow time through Lake District after that made good time to Ormeskirk put up at the Talbot Hotel. august 30th Left Ormeskirk nine forty five had to cross ferry from Liverpool to Birkenhead, had a good run on to chester then to Whitchurch then we had dinner reached home at six-o-clock.