My parents Bill and annie (Nancy or Nellie) Wallace, Nellie after the music hall star of the time, married on the 23rd July 1923 and moved into rooms at 5 copeley Street, with George Stokes and his wife.

The night they married there was a huge thunderstorm and aston Brook burst its banks and flooded Elkington Street, Phillips Street and surrounding areas, dad had to push mom on a handcart to copeley Street. However, it was not a bad omen as they lived happily in copeley Street for 45 years before moving to chelmsley Wood, and they enjoyed 58 years together before mom died in 198l.

We were all born there, Ivy 1924, Ted 1926, Olive 1927 and me the afterthought in 1937. copeley Street was a cul de sac, the brick wall at the top end leading on to Upper Webster Street, and the other end opening on to Burlington Street, by the senior girls section, we could always see a vast stockpile of coke in the yard of the school from our house. I can remember everyone who lived there in the early days, hardly anybody moved until the 60s but I can't recall them so clearly.

Starting our side the road was Mrs.Lake at no.1, later my sister Ivy and her husband Howard cooper lodged with her, then Hilda & Bert Storer, and their children Michael, Peter, Phillip and Lynne. at no.3 was Mr. & Mrs Harry Blakeman with Hilda & Doris. The Wallaces at No.5. Turners next door, then the Barrs, Harvey and Brenda their children were slightly older than me, Brenda now lives in america but Harvey always comes to our Reunion.

Next to them was old Mr. & Mrs. Murray, she still dressed and looked like the old Queen Mary, wife of George V, next door to them was Mr & Mrs. carter, Ruth & Ernie and son David, he also comes to the Reunion every year. Then Mr & Mrs Spiers another old couple, and lastly the Fosters. Mrs. Foster was a character she always wore a large black felt hat, my mother said as a young woman she had her hair caught in machinery and was scalped and that was the reason she always wore a hat. She was also a "knocker upper" she would carry a line prop and bang the front upstairs window to wake the men, my brother in law had to get up at odd times as he was a train driver, but although he had two alarm clocks he still paid Mrs Foster a small sum each wek to use her prop.

On the other side of the road starting near Burlington Street, was the Wallins, Brenda was a cousin of the Wallins in Phillips Street, then Mrs. Bown and her daughter Minnie, later marrried to arthur Wassell, children Geoff and Margaret. No 3, Mr. & Mrs. allum and son Brian, Rose allum was one of the 5 daughters of Mr.Roberts who kept the outdoor on the corner of Webster and Talford Streets. No.5, The clarkes, Mavis was one of my best friends growing up and we still see each other. Next door Mrs. Ford and her daughter Pat, and Pat's grandad, later Pat was married to Jim Hayes, children chris and andrew, their neighbours were cal Todd, and the Ferris family, Ted, Roy, Jean and alan.

Next to them were the Smallwoods with Mrs Smallwoods elderly mother Mrs. McLavity who used to near the front door and had a big tortoise, then the Browns a number of older children but Jimmy and George were nearer my age, then the Edwards, children Ron, Joyce and Terry, and finally Mrs.Edwards brother Harry and his wife Violet crutchley. at our side of the street the last house had its front door in Burlington Street, but the bay window in copeley Street, with a blank brick wall between that bay and No.l where we used to play ball games, and cannon (washing pegs laid against the wall three I think with 2 on top and we had to throw a ball and hit all the pegs to the floor for a cannon).

Miss Taylor lived at this house and she had a high step where we kids used to sit on, she didn't like this and used to pour water under the door so we had to move. On the other side of the road when I was quite young lived the Bolands, who were cousins of my best friend Barbara Inson, her grandparents Inson lived there before the war. 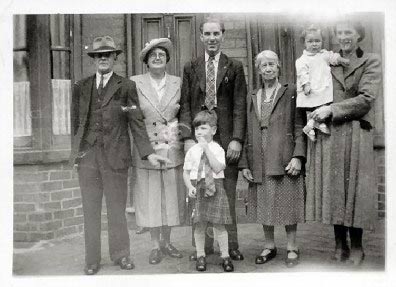 Mom holding my sister Margaret, dad, with myself in front
(in the kilt) and, Mrs. Bown , (my mothers adopted mother)
are standing outside our house with
friends of my parents from Scotland,
( wearing hats) anne and Joe Stuart.

My parents lived at 4 copeley Street; Sylvia Sayers mentioned them in her memories of the street.

anne and Joe Stewart were friends of the family, my dad was stationed for sometime in ayrshire Scotland working on tank waterproofing, during the war and he lodged with there parents during that time. anne and Joe lived in Galston near Kilmarnock; Joe kept chickens and Bees in his back garden. I remember we used to receive a chicken every christmas from them; my mother relied on this happening because if it was late in the post we had no christmas dinner. Inside the bird was usually a half bottle of whiskey. They were very kind people we used to visit them for holidays and I did stay with them one year during school holidays. 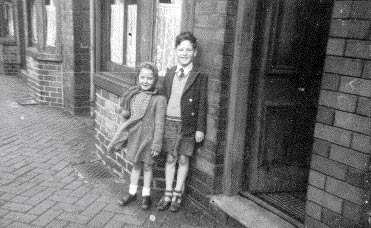 My sister and myself
I think we were standing outside of Mr. and Mrs. clarkes,
the other side of the entry lived Mr. and Mrs. allum
and their son Brian 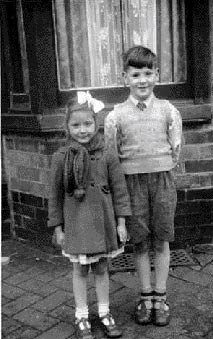 Margaret and myself outside
our house
(The Bisto kids)> 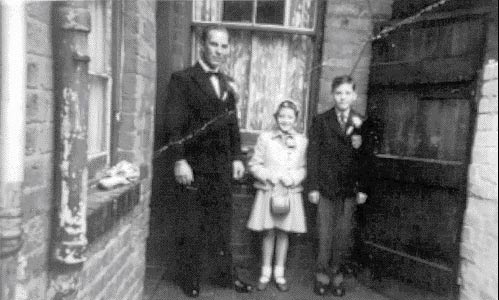 In the back yard dressed up for Brenda Wallins wedding
mum always kept a scrubbing brush and cloth on the window sill
note the drainpipe waiting a coat of paint.

I think these were my first pair of long trousers, I remember walking to the corner of the street by the lamp post and standing there in them, it felt very strange. 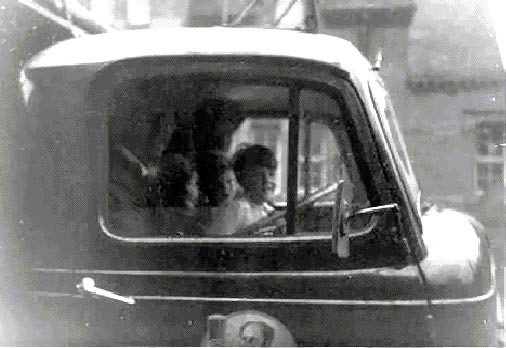 This photo was taken in his truck, on the corner of copley / Burlington Street
with me and Brian (from Scotland)
You can see thebreweries logo on the door and
in the background is Burlington street school.

I wonder if anybody as more photos of copeley street.

I remember for a long time the road surface was not properly tarmaced, just very rough, and not nice when you fell over. I remember always coming home with scratched knees and elbows. I spent a lot of time with mates sitting and playing marbles in the gutter or playing football, and using the entries for goals.