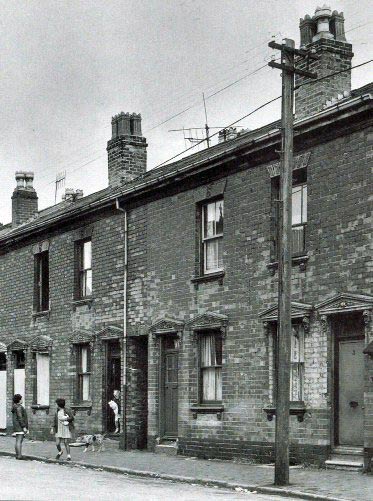 children Playing during the 1970's

I come from a long line of non-entities so it can be quite difficult to get a feel for what my ancestors were really like and how they lived as there is so little information about them. However, I do have one who I am finding out rather more about - one of my great great grandmothers, Mary ann Lockley. The reason I can find out a bit more about her and her family is that she was murdered by her second husband. Much of the following has been gleaned from reports in The Times newspaper. The story so far.

Mary ann Lockley, was born in 1836 to John Lockley, a Staffordshire-born boot and shoemaker who had come to Birmingham in the mid-1800s. In 1851 she was still living with her parents and two younger sisters in a court house in Ward Street. By 1855 she was living in Digby Street. It was from this address, at the age of 19, that she married my great great grandfather, Joseph Eccleston. He had been living in a court in New Town Row and was 20 years old. Joseph was a brass founder who enjoyed playing the violin. They had nine children, seven of whom survived to adulthood. Sadly Joseph died in March 1876 of TB, aged only 39 years. at this time they were living at 126 Ellen Street.

The older children were working by then: Sarah, 21, was a jeweller's case liner, Emily, 20, was a commercial clerk, Mary, 16, was a jeweller and Joseph, 14, soon became a brass founder. But there were at least 3 children under the age of 10 - Barron, 8, James (my great grandfather), 6, and Prudence, just 3.

Undoubtedly the older children contributed to the household income and, to further help with the finances, Mary took in a boarder and her children sometimes stayed with friends and relatives. In the 1881 census charles Bennett a widowed stone mason was boarding with the family, Sarah was staying with her Uncle James in clarendon Street, and Emily was staying with a friend, Sophia Jackson in alma Street.

Mary ann must have been pleased when her eldest son, Joseph, married clara allen, the daughter of an electroplater, in 1881 and her first grandchild, Horatio, was born the following year. 1883 was an eventful year for the family - her daughter, Mary, married George Whittaker, a corporation road sweeper, and Mary ann herself finally found another husband, George Nicholson. George was a widowed master baker with a business of his own in Birmingham and was a couple of years older than Mary ann. He didn't give details of his father's name at the wedding - perhaps he was illegitimate?

Mary ann's second marriage was not a happy one. George's bakery business failed and, in 1885, they had to move out of Birmingham to 27 Burlington Street, aston. George took work as a journeyman baker as and when he could get it but, overall, did not contribute significantly to the housekeeping, relying on Mary ann and her children. The couple were often heard quarrelling and money was frequently the cause of these rows. Latterly, George had been heard to threaten to "Whitechapel" Mary ann. This was a reference to the Whitechapel or `Jack the Ripper' murders which began at the end of august 1888 with the murder of a prostitute with a similar name, Mary ann Nichols.

On the evening of Saturday 22nd September 1888 the couple seemed to be on friendly terms when two of Mary ann's children, probably James and Prudence, left them at 8 p.m.. at about 9:30 p.m., Mrs. Wark, who lived next door, overheard an argument over money. George was offering 1s. 6d. for his lodging but Mary ann wanted a full 2s. The quarrelling continued for some time and eventually there was the sound of a chair being overturned. The voices stopped and Mrs. Wark heard the sound of George leaving by the back door. a strange noise, like snoring, was heard. The next sounds she heard were screams at about 10:20 p.m. when the children returned home. They were horrified to find their mother alone in the house, sat in a rocking chair in front of the fire in the parlour with her head bleeding profusely. They sent for a doctor immediately but he could do nothing for her and Mary ann was pronounced dead. Her skull had been smashed by five blows, leaving her brain exposed and protruding.

The police found the murder weapon, a coal hatchet normally kept in the cellar to chop wood. It had been left in the corner of the scullery and was covered with hair and blood. Two empty quart jugs that had held beer were on the parlour table and, aside from the victim and the blood on the floor, the parlour was undisturbed. It was found that a watch and chain (probably from her first husband) that Mary ann had been wearing earlier in the evening was missing. George was last seen in the neighbourhood just before 10 p.m., heading in the direction of Birmingham.

The police found that the watch had been pledged with a Birmingham pawnbroker by George. Eventually they found him in Walsall the next evening and arrested him. He first denied who he was and, on being told of his wife's death, denied knowing anything of it. He claimed to have been so drunk the previous evening that he couldn't even remember how he had got to Walsall except that he had gone by train.

an inquest was held by the coroner for Warwickshire, Daniel Robert Wynter, on the following Tuesday. The jury didn't take long to return the verdict of "Wilful murder" and George was committed for trial at Warwick assizes. George was subsequently brought up at aston Police-court where he was remanded for a week on the charge of murdering his wife.

The trial was held on Monday 17th December 1888 at Warwick assizes before Mr. Justice cave. The case was straightforward and, although Mr. Soden (the solicitor who had been requested to defend) tried to reduce the crime to manslaughter on the grounds that George had been provoked, the Judge would have none of it and directed the jury that killing is murder. The death penalty was given. George remained in H.M. Prison in Warwick until the sentence was carried out on Tuesday 8th January 1889, barely 100 days after he had committed the offence.

The report in the Times newspaper the following day recorded that George showed much firmness on the scaffold and that he had forgiven everyone connected with him. It also noted that the executioner had been a man named Berry and that a six foot drop had been allowed. The drop has to be carefully calculated, allowing for the prisoner's weight - if the drop is too short then the neck isn't broken and the prisoner is slowly strangled; too long a drop and the prisoner is decapitated! William Berry was the principal warder of the prison.

I wonder if George really was a bad sort or whether he had gone downhill since losing his business and, therefore, his ability to provide for the family?

What became of Mary ann's children? Did they stay on in Burlington Street or go to live with relatives? Perhaps the local newspaper reports will provide some of the answers. 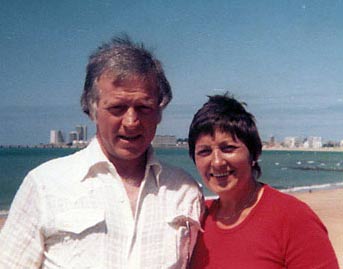 cago Plastics was in Burlington Street aston just behind the old aston Hippodrome. I started work there in 1967, and was made welcome right away, the people I worked with turned out to be great work mates. The gaffer was a lovely man called John Wright, his wife Joyce was the company secretary she was a very nice lady. If I had one criticism would have about John Wright? It was that he was too soft on us lads, lads or should I say "the crazy gang".

Let me name the boys and I use the word boys lightly, there was myself, Rod Birch [demented rat], Paul [Macca] McHugh, John Barnet, chris workman, Stevie Gorle. Well one of our great pass times in work was "wanging" the modern equivalent is Frizbee, but we used a lethal paint tin lid.

You can ask Rod, not as sweet an innocent as he seems, the work was easy going but at times we worked very hard ,the jobs we did were, chrissy Wokman, he used to turn out Fibre Glass mouldings. Rod Birch-Machinist, Routers, Spindle Moulders etc John Barnet-Stevie Gorle, Vacuum Moulding My self-polishing-vacuum moulding. Paul [Macca] Mchugh-tool setter.

But I must tell you know one thought they were better than the other and that's how we liked it. We once talked John Wright into buying us a stereogram we loved it only trouble was it was not very loud, so Macca an Rod wired a big speaker to it, and boy was it loud!!! So loud we got complaints from the house's close to the works. The best was The aston Hippodrome said that our music was so loud, that their punters could not here the bingo caller, we had to laugh.

Then there was The Bartons arms our local we were in there every dinner time and night time we never got drunk? But not far from it. When we were late back from dinner John Wright would read us the riot act. He often got very angry with us, but always calmed down, once the machinery started humming.

Well I think I will end it here a get Rodders to write something. as he was one of the main instigators so come on Rod put your side on paper?

If all work places were like cagos, and all bosses like John Wright I would work there tomorrow - provided Rod, Macca, chris, John Barnett, and Stevie, were there as well.

Thanks boys for a brill time I will never forget? any of you cheers. Dick Sheppard 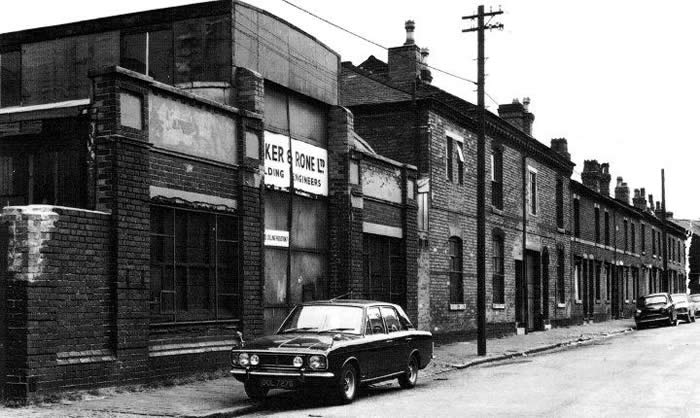 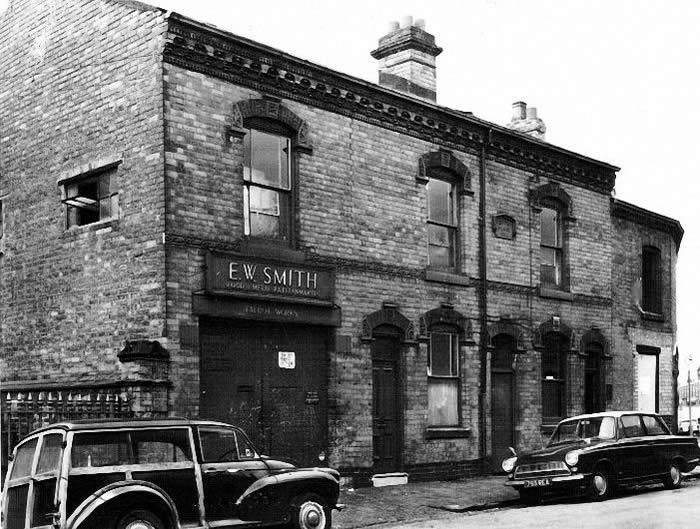