Once Upon a Time, There Was a Tavern by Les Robinson

I remember we got into town that night at about 8 o'clock, It was a cold November night but the 55 bus dropped us less than 400 yards away, a few minutes brisk walk.

We got into the pub at about 8 10pm, the three of us, Steve Grater, Steve cox and myself, we knew quite a few of our friends would be down there already and even more would arrive later.

I remember going to the bar and buying three pints of Lager, Steve c meanwhile had put some money into one of those new fangled video machines, the bat and ball game. Sure, old fashioned and simplistic now, but then? Wow!

I had always been a bad loser at most things, thankfully, I've mellowed now and although I still like to win, its not the be all and end all that it once was.

Damn..I was losing and losing badly. I punched the machine and walked away, Steve c shouted to me to come back. I turned from the middle of the pub and did what was for me a strange thing...I actually listened.

I put my hands on the button and then my whole world roared like a thousand thunderstorms raging in my head.

I flew through the air doing a complete somersault before hitting the wall at the bottom of the stairs. I could smell burning, my ears hurt like I had never known, with my eyes wide open I couldn't see an inch in front of me.

The IRa had detonated the second of their bombs that night in Birmingham.

I was lying in the rubble that seconds before.....was the Tavern in the Town.

anyone who says they saw legs and arms missing etc, well, take it from me, they certainly weren't in there at the time.

Every light blew in the pub, plunging it mixed in with the dust, into total darkness, you couldn't see a thing.

My both eardrums burst with the concussive effects of the bomb, I had taken shrapnel to over 15 parts of my body, and my hair had burned off due to the heat effects of the blast, Later, I noticed sacs of fluid hanging from my fingertips that had been directly exposed to the bomb

My trousers had blown apart at the seams due to the pressure going up my legs and being unable to escape at the waistband, my nylon sweater had melted to my body..

I started to rise to my feet but kept falling over, my balance gone, along with my eardrums..I remember crawling up the stairs and as I did so, my arm slipped through a jagged hole in the stairs where the bomb blast had punched through...I got to the top of the stairs, I still think to this day, the first person to get out of there that night. Town was in uproar....no one stopped to help me.

My dad always said to me, 'Les, if you're ever in trouble, tell me'

Dad, I was in trouble. I decided there and then to make my way home to Hindlow close in Nechells. I 've always had this thing about, you can't die on your feet. I had to stay up, I was determined to.

I look back on it now and liken it to learning to ride a bike, I'd go a few yards then simply and slowly ... just fall over ... I was in no real pain, Shock yes, fear perhaps, pain .. not yet, that was later ... I remember the only time I cried ... it was when I got to the long wall going down curzon St. I cried because it meant I could stop myself falling over as I made my way home. I saw a friend called Jimmy Kennedy as I neared home, he was with his girlfriend Lucy, they were going up to town because Lucy's sister was in the same pub. Jimmy later said ' I looked like a monster'. Looking back, I can't remember why he didn't help me.

I got home, I dont remember how long it took, I just know it was slow and hard.

I knocked my house door and our lodger, arthur Powell opened the door and I fell into his arms. I was home, I was safe. a neighbour two doors away took me up to the accident Hospital in Bath Row. He was an Irishman named Mr Quinn.

How can I? My brother married a girl from Limerick. They have two fabulous children. Tell me, which part of them should I hate?

I came out of the accident Hospital on November 23rd, I remember lying in bed staring up at the ceiling unable to sleep, my Dad not wanting to leave me alone must have lay there awake listening to my moans.

People never told me that even with your eardrums burst there was still a roar going through my head that seemed like it would never end.

I remember the most awful thing of all ... the smell of my hair that had been reduced to a small frizzled stubble. I had taken several pieces of glass under my right armpit, one through my knee, my left eye (thankfully missing the eyeball itself) a few more in my leg and one to my hip.

On the whole I'd much rather have been in Philadelphia. I remember my family coming to see me over the next few days. My Uncle Les, a huge man being reduced to tears as he hugged me. My Uncle Tommy Brennan, unable to face me because he was Irish ... silly, silly man, I loved him very much.

I made my way up to the Bathroom to try to get myself cleaned up, when I looked in the mirror at my peeling and burned face, I felt like crying. I was a 22 year old man with no hair and a scabby face ... bloody hell, did this mean I'd have to start supporting the Villa soon as well?

Various friends came down to see me, my closest friend alan told me how much his Mom was worried about me. His Mom?  She had been like one to me too. I knew I had to pay her a visit just so she knew I was alright. I caught the 55 bus to cole Hall Lane to see her. I remember people looking at me then when I met their eye, they turned away.

My friend Steve c had taken worse injuries than me, thankfully like mine though, only minor. He came out of Hospital, two weeks later. Steve G fared a little worse. He had been out in the open and taken half a beer glass into his back.  Paradoxically, the further away if you survive the blast. the more shrapnel came at you.

I remember meeting up, the 3 of us, collectively the worst hair styles in history. I was off work nearly 5 months while I recovered, I wrote earlier I have never once dwelled upon it. That was a fib. My first drink in a pub post Tavern was when my friend Steve c's brother-in-law took us up to the Skylark on castle Vale. I remember sitting down all calm and collected as we waited for our drinks. as he bought them over and I lifted it to my lips, I began to shake like a man holding a Pneumatic drill. It took me another 3 months to get over it.

I said I never lost friends in the Tavern. I did .. but not like you'd think. With the money from The Lord Mayors fund, from criminal Injuries, from collections at the cO-OP dairy where I worked, plus local pubs, the Erdington Round Table, we were paid thousands. The equivilent easily of 2/3 years wages by todays standards. There were seven of us with such riches. Now, think of our other friends who had arrived late and missed it. They never saw the pain, only our money.

One of my closest friends who was in there with me ... well, it happened like this. We had received £500 pre christmas to spend on what we will. I was also on full pay from the Dairy as well as various collections; (free milk, eggs, pop etc..thanks Harry!) 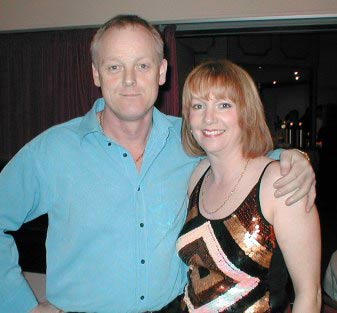 In the March, my second large payment landed on my doormat..it was for a £1000. Hurriedly I ran round to my friends house to see if he'd had the same. as I showed him my check all excited (remember if, you were on £40 a week then, it was the equivilent of 6 months wages now). He looked at me and said the most devastating line I'd ever heard. 'You should have died in that place'. His postman had not yet been. He tried to apologise a few days later when the postman called a few hours after I'd been round. Sorry, I'm a bit petty, I wanted and still dont, any of it.

Its burns day (no, not the Robbie one) at the accident hospital in Bath Row. There I am feeling all sorry for myself, scabby face, no hair (growing back mind), really poorly fingers that had been directly out in the blast. When a young girl sat down beside me. I couldn't tell her age, it could have been anything from 13 to 23. She told me that when she was 10, she picked up a can of petrol that her dad had used to light a bonfire. You want to know her ambition? She wanted a nose again.

My name is Les Robinson, I wont write about the Tavern anymore. I only did this because even 29 years later, I am still thoroughly ashamed of myself