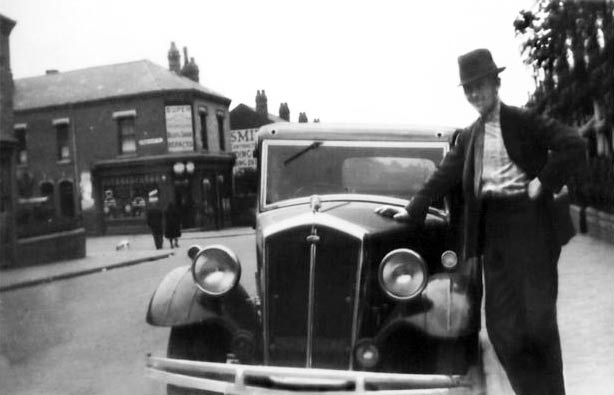 Here's a photo of my father taken outside his parents Walter and clarissa Jennings's house number 191 Bevington Road, aston. Thanks to the information on this site I know the number.

Walter was John Jennings's youngest son (in previous photo). The car is a Wolseley 9 and I know it was bought new. I have found out the car was manufactured between 1930 and 1935 so this would be the date of the photo.

I have another one of my grandmother in the same pose obviously with her sons the new car!

I resided in Bevington Road from 1959 before that Putney Road Handsworth. There was a chap nearby who had fought in the Boar war but I can only remember him known as Gaffer George. at Bevington Road I lived two doors away from a locally infamous family, whose family fights only took place early Sunday mornings and spread into aston Park where the parkie sometimes got involved, and also lodgers, in particular Mick Harvey who I played soccer with "Togga". Micks claim to fame was he was twelfth man for crewe alexandria when Spurs beat them 13-0 at White Hart Lane in the cup (1959?). a neighbour Jack Raybone said his real name was Jack Brown and he had played for the Blues but I don't know if it’s true.

I used to mind cars on match days and even then could make two or three quid. I lived two doors away from the Startins, who were related to the motor dealers but there was no relationship to their finances.

I went to Birchfield Road Boys School with Paul and Kenny Startin and at the same time John Osbourn and Tony Iommi were there. The headmaster originally was "Gabby" Whittaker but he retired 1961 and Johnny (Ogre) Oldham took charge, who recently had an obituary in the Birmingham Post. He had been a war hero (spitfires and wellingtons), had met churchchill, played cricket for Lancashire and football for Bolton Wanderers. He wanted us to be like him. However he did get me through GcE O level and I went to work for WJ Whittall, builders, Princip Street. Old Joe Whittall was still alive and was involved (1963). He had been a mate of Joseph Lucas and still got all Lucas’s work. I retired in 2012 and am interested in family history as well as classic cars (Daimler/Lanchester). 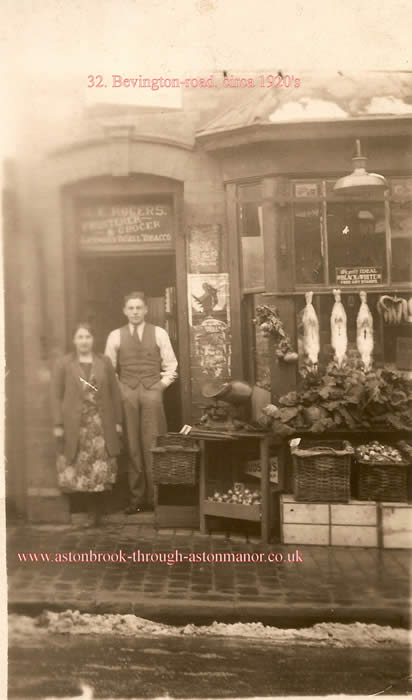 came across this photo the other day and thought you might like to have this copy. Its the family shop run by my grandfather (James Rogers)at 32 Bevington Road. Not sure of the date but think it would be mid to late 1920s.

He was also a boxing trainer and trained Len "Tiger" Smith at Kyrle Hall. He had 3 sons: Raymond (my father), Ernie and Jimmy. Jimmy was a successful amateur boxer butdied following his first professional fight. I'm told James was married a few times and there were other children. I only know of my father's half siblingsGeorge and Lillian Walton though.

Family anecdotes say he was also a bouncer at the original Perry Barr dog track.

My godfather was Leslie Hood, the son of Gentleman Jack Hood, another well known boxer, originally from Lupin Street I believe.