I was born at 2 back of 15 (or 2 court 5 if you prefer!) Bartons Bank in January 1937 as was my mother, alma Longmore, in 1905. The house was one of five making up the court and shared a large yard (paved with blue engineering bricks) with the GIBSONs next door. There was also a shared miskin at the rear of the Gibson's house. The house was a large L-shaped property built around the 1870s and the Longmores rented it, moving in sometime between 1902 and 1904. 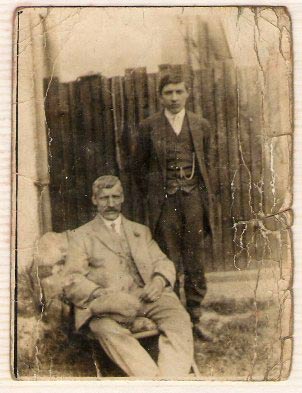 The main leg of the house (adjoining that of the Gibsons) was two-storey with a living room on the ground floor, a large coal cellar beneath it, the front door (rarely used!), and a hall and stairway leading to three bedrooms on the first floor. The other leg of the house was single storey and comprised a long corridor (containing the back door) leading to the kitchen.

There was quite a large garden attached to the house and my grandfather (whom I never knew as he died in 1920 from heart disease) was a keen gardener who also kept chickens, rabbits and a goat. His sons maintained the garden after he died and my grandmother and her youngest son remained there until the 1950s. Sadly it was demolished as part of the so-called 1960s slum clearance, but it was anything but a slum.

My grandfather and his two eldest sons were coppersmiths and there was a good income coming into the house and I would imagine the house was quite "high class" when it was originally built. The wall of an adjoining property was coated with black bitumastic as a sealant and served as an ideal support for a large and very fertile black grape vine. I can also remember a proliferation of red and black currants, loganberries and gooseberries as well as the usual lettuces, radishes and other vegetables.

Of course, my grandmother had an old copper (boiler) complete with dolly and a mangle, and the only things the property lacked were an indoor toilet and bathroom. My earliest memories of the house were of going down into the cellar during air raids.

Of Bartons Bank itself I remember little except for a coal merchant on the opposite side of the road, though many's the time when I have got off the No. 6 tram and walked up Potters Hill.

I can remember the nameplate of Rifle crescent at the other end of Bartons Bank, but don't recollect ever wandering beyond it! My parents, my younger brother and I moved out in 1943 when a war-damaged house in Knowle Road, Sparkhill became available to rent.