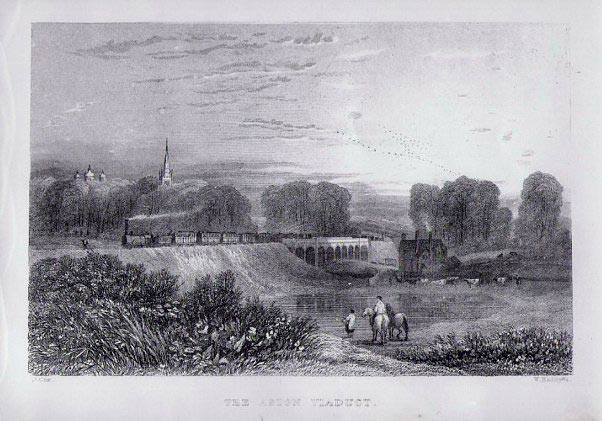 In 1837 the Grand Junction Railway from Liverpool came through aston. The route, surveyed by George Stephenson, took advantage of the Tame valley's slight gradient, although this involved several crossings of the meandering river - including two across the great bend near aston church

a ten-arched viaduct was built over the two arms and the meadow between. James Watt Junior's objections to the railway may partly explain its route: even so he lost the east end of his prized chestnut avenue from aston Hall. Within the next decade a cut was made to join the two arms of the river loop on the Witton side. There were low bridges over Witton and aston Lanes and Lichfield Road, canal and brook: therefrom the great curve of the rails swept down through Nechells and Duddeston to a temporary halt at Vauxhall, thence to curzon Street terminus in the Rea valley.

astonians wishing to travel on the new-fangled trains to Liverpool or London had to make their way to curzon Street: from 1842 they could go to Derby and the north-east from Lawley Street terminus. Ten years later Navigation Street (New Street) Station opened in the centre of Birmingham.

In 1854 aston Station gave local access to the Grand Junction line and New Street: not until 1880 was there a loop line from aston to Stechford on the London line. Witton Station opened in 1876. Meanwhile Hockley Station (1852) had provided an access point for the Black country and Oxford lines, and Saltley Station (1854) for the Midland lines to north-east and south-west.

In 1862 the Sutton coldfield line (later extended to Lichfield) left the Grand Junction south of aston Hall Road. Both these lines helped to accelerate development of east aston and south Erdington, as there were sufficient stopping trains to provide a commuters' service. Until the advent of electric tramcars the railways were much used for travel to aston Hall and Lower Grounds, and to Sutton Park for some decades longer. There were no sidings or railway facilities in the manor, chiefly because the lines were carried on embankments above the Tame floods. 'aston' Goods Yards were in Duddeston, and those near Witton Station were in Handsworth.