aston Resser it's what we as kids called Salford junction. That is how it is addressed today and is regarded by the canal fraternity as the precise centre of the canal system of England and little thought is given to its wildlife Its barely a couple of miles from the city centre and covers very little open ground and it is surrounded by a bustling busy mass of concrete, bricks, and tarmac, acres of glass and other man made substances.

It is cut apart by the busiest motor way in the country and almost covered by Spaghetti Junction.Yet it is still a haven for wild life it would be misleading to say it was one of the best hunting grounds for bird watchers, But the expectations of adding to your twitchers journal are quite high being as it is so close to the city centre, and that the reservoir is well used and extremely popular with fisher men, athletes and racing cyclists, and dog walkers.

Ornithologists are rewarded with many different kinds of birds. Pigeons are the most obvious along with starlings, canada geese, Great crested Grebe, Mallard, Tufted duck. There's the occasional Widgeon Teal, Gadwall Gulls common and black headed, and Terns. all these are winter visitors.

In the spring Wagtails Blue and Great tits, hedge and house sparrows, King fishers dart along the River Tame The Kestrel pops over from the motor way verges. I suppose it's a good pit stop for all the birds making for the many nature reserves in close proximity of the link up with the Tame Valley. a far cry from the day when the barges were working boat and not leisure . 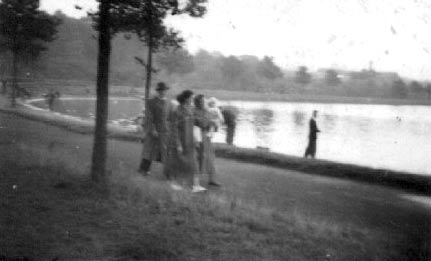 This is a photo of me in moms arms about 1954 down the aston 'resser', notice in the back ground there is no concrete anywhere to be seen, 'The messy junction' nowhere just open fields and trees, its my mom, nan, uncle having a walk round to get a bit of fresh air and dad, he's taking the photo as usualI. 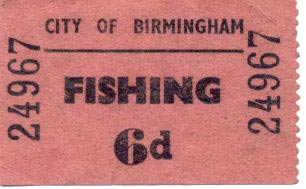 I wonder what that factory is in the distance? The other item is a fishing ticket for the day to fish on the water, 1965/6 and that's beside having to have the Seven & Trent licence which I think was 7/6d or 13/6d for the season from a fishing tackle shop on cuckoo bridge I maybe wrong on that one?, but I know it was 2/6d for a point of maggots all to try and cache something bigger than 'jack bannocks' I could never get into it, too boring for me 'no way',