an act of 1861 authorised the improvement of Hockley/aston Brook: it had long been a dump for refuse and a drain for the untreated sewage of Smethwick and Handsworth as well as of aston. Millworks and heedless building prevented free flow, and floods spread pestilence in a wide swathe along the banks.
The Tame had a much greater and less variable flow, but it was also much more polluted by Black country industrial and domestic effluent. To find joint solutions for separate irresponsibility, the Birmingham Tame Rea District Drainage Board was established in 1878. aston Parish was represented thereon. Work began along the brook the following year. a brick invert was made from Hockley to Long acre with a main sewer alongside. Nineteen bridges required alteration or rebuilding. as the built-up areas were impermeable, rain that would once have soaked into the ground and replenished the water-table now ran at once into drains and choked the sewer. It needed reconstruction in 1895. The brook bed was lowered three years later, and between 1917 and 1929 it was buried in a deep brick tunnel all the way from Winson Green to Thimble Mill Lane, and from Plume Street to cuckoo Bridge. Sewage disposal is dealt with in DUDDESTON and NEcHELLS.
The Tame loop near the church survived for some decades, gradually silting up until two pools were left. The one near Serpentine Road was last to be infilled. By 1857 the two channels at Salford had become one. 'Shire Brook' was culverted two decades or so later, and the demesne meadows were drained to permit building between Witton Lane and the railway embankment. 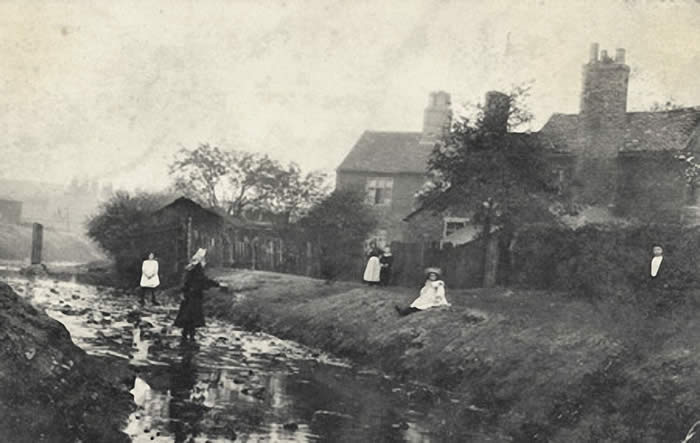