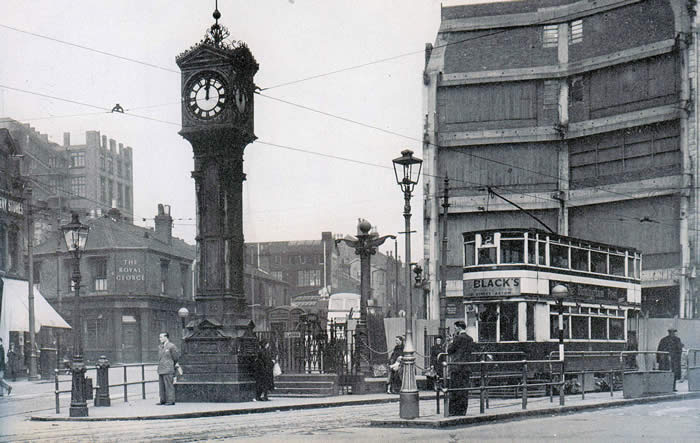 aston was startled on Saturday forenoon when the news spread that a women had been murdered in Tower Road. The police were quickly upon the scene and it was discovered that Jane Harrison, a married women had had her throat cut; it was alleged, by a man named John Davis.

Mrs Harrison was at once removed to the General hospital, where she died about a quarter of an hour after admission.

Mrs Harrison, whose husband formerly kept the old Barton  arm’s, had lived at Tower Place for almost twelve months, her husband some time ago been admitted to an  asylum, She had two sons, one of them who was a soldier, and the other, who works at a rubber factory in aston, lives with her. He left home at about six o clock Saturday morning, leaving is mother in the house alone. She was engaged in cleaning when John Davis, a man of about fifty years of age, who had been seen by neighbours to pay a visit to Mrs Harrison on a former occasion, entered the house. This was about ten o clock. Soon afterwards a next door neighbour, heard Davis and Mrs Harrison engaged in loud conversation. She did not think at the time they were quarrelling. But shortly before half past ten she heard a scream, and Mrs Harrison came rushing towards her house, crying “he cut my throat.” She was carrying her head on one side, and there was a deep and long wound in her throat, from which blood was freely flowing.

Mrs McLuckie immediately went in search of a doctor. On reaching the passage leading through the court she saw the man Davis making his way towards the entry, and believing he was about to make escape, she called to some neighbours who were standing near the entrance, to stop him. Seeing his retreat cut off, Davis stopped and remarked, “You can fetch the police.” a police constable was fetched, and the man was taken to aston police station. Mrs McLuckie meanwhile went for Dr. Hunter, who proceeded to Tower Place, were he found Mrs Harrison in a state of semi- collapse. a neighbour had made a rough attempt to bandage the wound, and Dr, Hunter, made a temporary dressing, and ordered the women’s immediate removal to the General Hospital in the horse ambulance, which was fetched from the Fire Station. When she arrived there it was at once realised she was in a critical condition, she expired about a quarter of an hour after admission.

Prisoner before the magistrates

Davis was before the aston magistrates on Monday, when the charge preferred against him was one of wilful murder. In reply to the request of the Deputy chief constable (Superintendant Hannah) for a remand, the prisoner offered no objection, and walked briskly down the steps to the cells.

The inquest was held by the city coroner Mr Issac Brasley at Vitoria Law courts on Tuesday, Edwin Harrison, a son of the deceased, said the father was at present a patient at Hatton and had been there about five years. Witness had known the accused seven years. accused who was married, had occasionally visited his mother. Witness remembered the wife of the prisoner coming to the house about four years ago. She saw his mother, who said she could not get rid of him. there was a similar incident more recently, and he learned that the accused had been going to see his mother. Witness saw a letter from him last Whitsuntide, written from near Liverpool, witness destroyed it, and his mother did not see it, he heard about three weeks ago that a man had been enquiring after deceased and she heard about. Witness left his mother last Saturday about 8:50 alone in the house. When he went out she complained of headache. about 11:10 witness heard that some think had happened and went to the hospital, finding his mother dead.

asked if he had any questions, accused said he wished to refer to the statement by the witness that his (accusers) wife went to see the deceased.” that,” said accused, “was three years ago.” The coroner: It is not really any evidence against you. accused: Only young Harrison said that she did not want me, or some think to that effect; that was only a put off, because we met the next evening just the same.

a next door neighbour of the deceased, ada McLoughlan, said that about two or three weeks ago she saw the accused at the bottom of the entry, in company with the deceased; they were talking together. On Saturday morning last, about ten o clock, witness saw accused go to the house, and twenty minutes after he had gone in she heard loud talking, but could not hear what she said, and was unable to say whether they were quarrelling. about twenty minutes afterwards she heard the deceased screaming and saw here rush out of the house; crying out; “what shall I do” deceased’s head was hanging on one side, and blood was from her throat.

a crowd had collected and the prisoner was prevented from escaping, prisoner said "you will not have to fetch the police" another remark he made he made was it was all through jealousy, mean while Mrs Harrison was in a terrible state, help was not for her noticing her hands were black as though she had been black leading the grate and the room was in disorder, as though she had been cleaning the it. a man named Redwood who had hlod of the prisoner said to him "was it your wife" he said "no it was an h***** whom I had been living with.

Mrs Harrison was later taken to the General hospital, and in about an hour the poor women had died with out doubt from the wound inflicted in her throat.

Execution of the aston Murderer.

On Tuesday morning John Davis (53) silverer was executed at Warwick goal, for the murder of Jane Harrison at aston Manor. The murderer was a nervous and emotional man, who felt is position keenly, but for the last ten days he became resigned to and accepted is fate in a certain amount of resolution. He was comforted during the christmas week by a visit from his wife and grown up son and daughter, he slept fairly well the night before the execution and was able to walk from is cell to the drop without assistance. He never denied the crime and showed some contrition.

The execution took place at eight o clock in the morning and there was in attendant the under Sheriff  Mr R c heath and the governor captain D’aeth, the Prison surgeon Hubert Tibbits, the prison chaplain Rev a K Thomson. The chief Warder Mr E Martin and other officials. Ellis of Rochdale was the executioner he was assisted by Willis of church accrington. Death was instantaneous as the neck was broken by the drop.

an inquest was afterwards later held before Mr Wilmhurst the county coroner and evidence of the carrying out of the death sentence was given by captain D’aeth, Mr