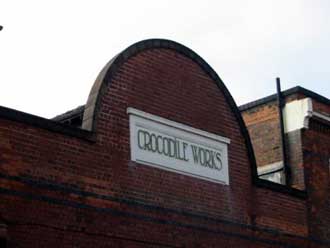 This is a brief story of the crocodile works of alma Street aston. Horace chavasse bought land in alma Street aston in 1860. It was a Greenfield site, with Hockley Brook flowing through it. Known to us as aston Brook. It was the ideal place for building a factory. The city council had built a road across a year before and called it alma Street after a famous battle of the crimean war in 1854.

.The factory was to be used as a sword manufactory. In 1869 Ralph Martindale bought the factory from Horace chavasse and it was renamed "Ralph Martindale & co."
In 1873 the company in alma Street was in financial difficulties and Ralph found himself forced to sell the business to a consortium headed by Ralph Stanley Salter. The transaction was completed in January 1874, with Ralph Martindale continuing as the managing director with a salary of £500 per annum. His health began to fail and he resigned from the board, attending his last board meeting November 3rd 1878, he only lived for two months after resigning and died February 24th 1879 in Erdington. 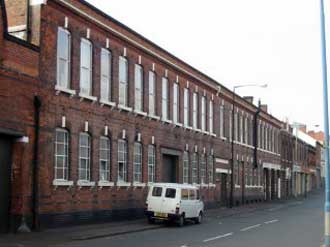 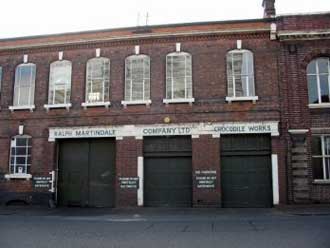 The company made many things for the war effort during the 1914 1918 war, bayonets, bill hooks and wire cutters.

The factory still remains in alma Street after many diversifications still producing hand tools, this is only a dip into the full story.
We will put more on the download page as soon as possible; it is a truly remarkable story. If you would like to read the full story I can make arrangements to get it for you the details will be on the book page later. 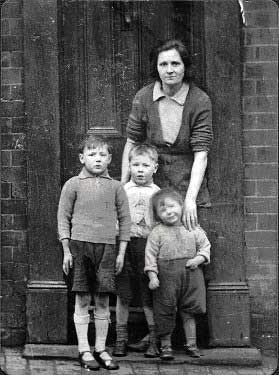 This picture was taken on a sunny Sunday afternoon in august 1932 outside 27, alma Street, aston
Floss Parsons, Tony (6yrs) on the left, me (4yrs)in the middle and Robin (2yrs) on the right.

My dad was Henry Reuben Parsons born 28 May 1906 in Birmingham. He married mom, Florence Bell born 11 august 1903, also born in Birmingham, on 15 august 1926. Dad had two sisters and two brothers and for a time they all lived together in a back to back house at 41 Unett Street, Hockley.
Granddad was William caleb Parsons and Gran was Florence Bridget Loftus. On mother's side, she had brothers and sisters, numbering seventeen in all. Granddad on that side was charles Bell. I never knew Gran's name, to us she was Granny Bell.
Both grandfathers died before I was born, but I remember both grandmothers very well. My brother Tony was first born of our family, 12 March 1927. I followed on 20 November 1928. Sister Mary Ruby (always known as Robin) followed on 4 January 1930 and the last was Joseph Kenneth born 28 august 1935. Dad died 7 February 1971 age 64yrs and Mom survived him until 15 May 1976, age 72yrs. They are both interned in Witton cemetery.

Our childhood, like that of so many children of our generation, was interrupted in September 1939. The outbreak of war saw us evacuated, first to Swadlincote for a short while. We returned home after the `phoney war' and then after about a year, again, but this time to the Seabridges in Engine Lane, Glascote Heath, Tamworth. This of course was a great upheaval during our formative years and schooling suffered from the constant interruptions. Standards of education dropped considerably. So we all had a lot of catching up to do in the ensuing years.

Early memories, shared by thousands like us, included the celebrations in aston Park where we saw dinosaurs, Romans, gladiators, army battles etc. coronation Mugs (still got mine), tins of cadburys chocolate for the coronation and floats depicting all kinds of trades and best of all the FaIRS. The Onion Fair on the Serpentine Grounds - what memories of those. The Boxing Booths, `Roll up - Roll up'.
The Barker outside the tent wielding a long sharp sword and inviting young boys to hold out their hand whilst he placed a potato on their palm and then commenced to cut it in two, without hurting the boy's hand. It took a great deal of nerve - but the reward was free entrance to the fights inside.
Penny roll down the shoot - dodgem cars lights flashing off the contact poles - cake walk - carousels with gleaming horses, riding, in your imagination, to escape the red Indians - baked spuds with salt off the block - the Ghost Train - helter skelter and whooshing down the corkscrew on a mat - swing boats - coconut shies - air rifle ranges - hot dogs with onions.

Myriad fairy lights - military music through the loud speakers, steam engines pounding and leather drive belts slapping as they powered the rides. Mixed smells of hot oil, coal smoke, and steam and cooking food. Faggots & Peas, beef and pork for sandwiches. The screams of fear and delight from girls and women, the rough shouts of the barkers from in front of brightly painted booths. Then the long tired walk back home, all our precious pennies spent. None left for the tram fare back to Six Ways. a wash, a hot drink and lots of excited talk as we boys recounted our various adventures - then, up the wooden hill for a well earned rest. To sleep, perchance to dream of next year's adventures. ah, what fair memories of the fair. 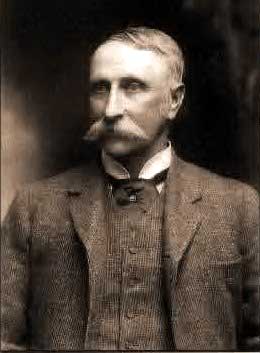 Frederick York Wolseley was born at Golden Bridge House, county Dublin, Ireland on 16th, March, 1837.  He went to live in australia and reached Melbourne in 1854, he was in his early teens. This is where is ideas of a mechanical shearing engine came to fruition after showing it to the interested parties. He then formed the Wolseley Sheep shearing company in 1887.

He left for England and transferred his business to alma Street in aston Manor. He had returned to australia resigning from the company but the intervention of his foreman Herbert austin (the founder of The austin Motor company). He later returned to England having a serious health problem from which he died aged 80 January 8th 1899 and is buried in London.

They moved into the premises at alma Street in 1897 next door to Ralph Martindales. Kelly's Directory listed the company as Wolseley Sheep Shearing Machine co Ltd and their work title Sheep Shearing Machine and cycle components, at the premises Sydney Works alma Street aston Manor. The Wolseley company were the employers of Herbert austin who later rose to become the General Manager of the company and by 1896 under austin's direction produced the first Wolseley Motor car.

In 1895 the first Wolseley experimental car in fact was designed and built by Herbert austin and the rest of the story became one of the biggest manufactures in Birmingham. The Wolseley name disappeared when the last car was made in 1975. From Ireland to australia and finally to aston, Birmingham, England. The Wolseley name became part of our heritage.

From Norman Painting, Morris commercial and Wolseley historian, Small Heath: austin also built machine tools such as millers, lathes and automatic screw making machines to his own patented design. Before Vickers bought the motor car and machine tool business off WSSMc over 400 people were employed at alma Street. 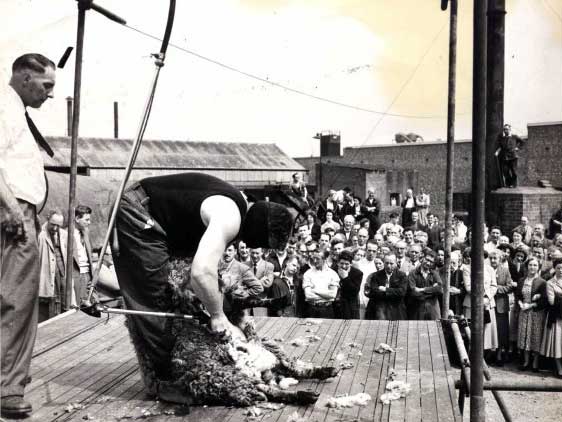 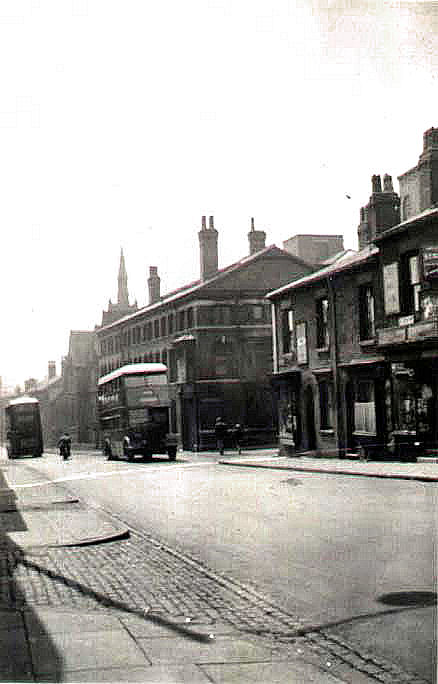 I was born in alma Street in 1952 with 2 brothers. My maternal Grandmother lived across the road from us and my father's family all lived and worked in the near vicinity. Unfortunately they are no longer with us to gain information from, on what life was like and who else lived around us.

My Grandmother lived near to a wood yard (Dossetts?) in alma Street and there was a barbers shop very nearby on our side of the road. They were of course all back to back houses with the usual ammenities! There was a large air raid shelter at the back of my Grandmothers house.

I am eager to learn more of life in the area and will remain a regular visitor to your site in order to do so, as other members of my family are equally interested. 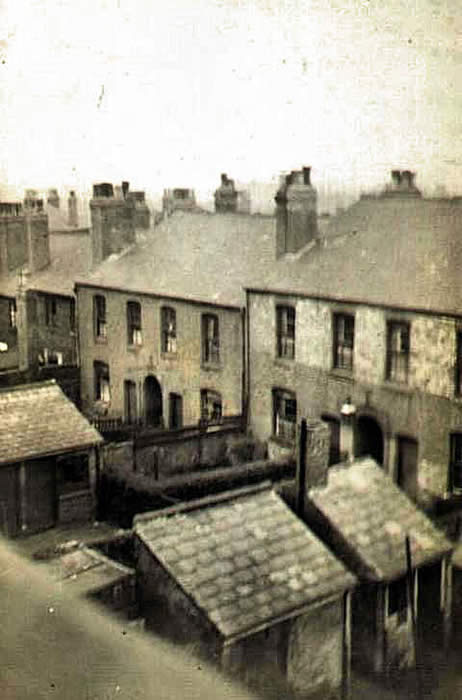 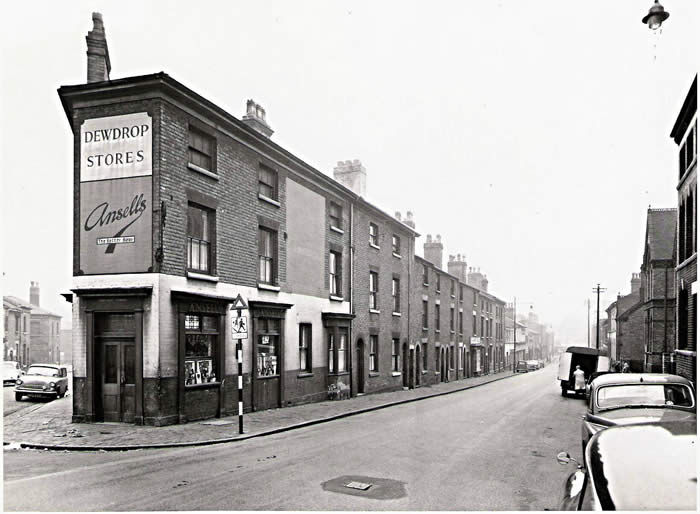 alma Street at the junction of Inkerman street circa 1960